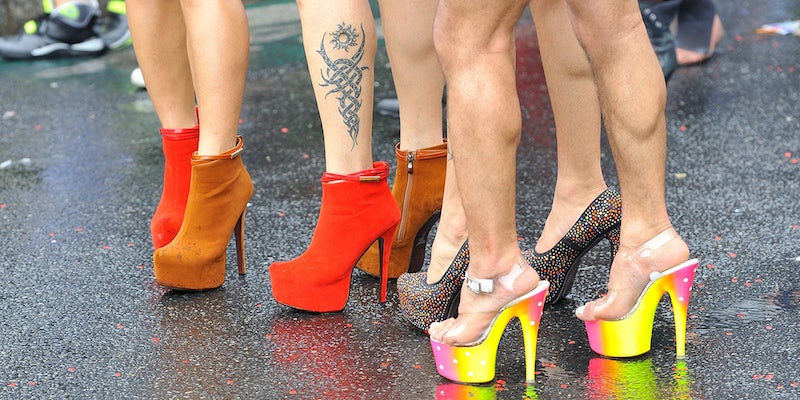 The owner of Jack'd wants the gay community to know that words matter.

When online clothing retailer Marek + Richard added a “No Fats No Fems” T-shirt to its catalogue in late April, the gay men who make up the store’s primary customer base spoke out.

Calling the slogan “75 percent of what’s wrong in the gay community,” men criticized the store on social media for marketing the shirt—which is based on a phrase often used in dating profiles.

On Thursday, the gay dating app Jack’d responded to the controversy with a new line of apparel designed to address the prevalence of discriminatory language in gay dating. As Jack’d Marketing Director Kevin Letourneau explained in a statement posted to Facebook, phrases like ‘No Fats No Fems’ can have a dire impact.

“Gay men are three times as likely to have an eating disorder, twice as likely to be diagnosed with depression and anxiety, and suffer a suicide rate double those of other men,” Letourneau said. “Words matter.”

The new apparel line, offered on the Jack’d page on the community marketplace Zazzle, features responsive slogans like “No Bullies No Bigots” and “Words Matter.” All proceeds from sales of the shirts go to the Trevor Project to support organizations working to lower suicide rates among LGBT youth. According to Letourneau, Jack’d will match each purchase with a dollar-for-dollar donation as well.

“As the youngest, and most diverse community of gay men around the world,” said Letourneau, “we see it as our responsibility to create a safe space to connect, and empower our generation to stamp out exclusionary phrases from our vocabulary once and for all.”

Slogans like “No Fats No Fems” aren’t the only form of discrimination plaguing the gay men’s dating scene. As the Daily Beast reported in 2015, apps like Grindr and Scruff are packed with racism as well; it’s hardly rare to come across qualifiers like “no blacks” or “no Asians” on dating profiles. Often, racist statements are shooed away as “just a preference” by users, but the result is still harmful and causes fractures in the gay male community.

Jack’d markets itself as the most diverse of the gay dating apps, and has the highest proportion of users who are men of color. In fact, there was even a petition to kick white users off the app—though it was unsuccessful. While the company behind Jack’d has always been clear about its desire to promote inclusion and diversity in the gay dating and hookup market, it solidified its image when Jack’d endorsed Black Lives Matter activist Deray McKesson for Baltimore mayor in early 2016.

In a hilarious video Jack’d released in 2015, gay men act out, IRL, the weird behaviors they encounter on dating apps—including the famed ‘No Fats, No Fems’ line.

In an interview with Kinkster magazine, Letourneau acknowledged the fact that discriminatory speech still pops up on occasion on Jack’d, just like on any other hookup app. But, he said, it’s rare and the company tries its best to deal with it directly instead of just avoiding the issue entirely.

“We see it as our responsibility to lead by example and explore all options,” said Letourneau. “We understand guys are looking for what turns them on, but everyone should feel welcome in a safe space to meet new friends, go on dates, and enjoy some fun along the way.”