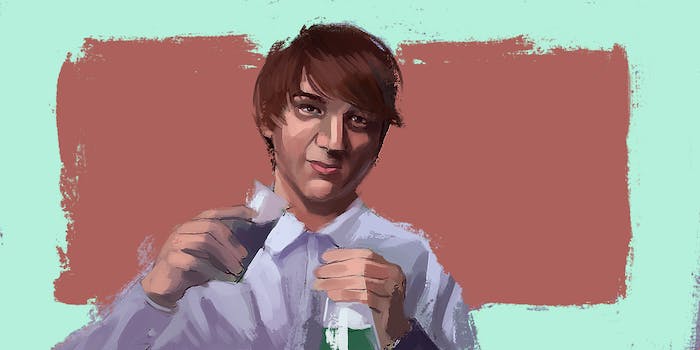 Jack Andraka is the poster child for the open-access movement.

High school student Jack Andraka is living proof that you don’t have to have a Ph.D. to make a potentially life-changing scientific discovery. Apparently, all you need is access to medical journals and a whole lot of determination.

Andraka is known for developing a revolutionary new method of diagnosing pancreatic cancer when he was just 15 years old. Instead of sending samples to a lab for expensive and laborious testing—which in the case of pancreatic cancer, often comes too late to save the patient—Andraka’s test uses a strip of paper dipped in a sensor that detects cancer markers in blood and urine.

His test was developed after years of private research, first in Andraka’s family home in Anne Arundel County, Maryland, and later in a professional laboratory. In his TED talk, Andraka describes writing research proposals to 200 professors and being rejected by all but one of them: Dr. Anirban Maitra, a professor of pathology and oncology at Johns Hopkins University.

Andraka’s research garnered him worldwide acclaim, along with the $75,000 grand prize at the Intel International Science and Engineering Fair in 2012. One of the things that really captured people’s attention was the fact that he began his research by reading open access articles online. Or as he put it, “a teenager’s two best friends: Google and Wikipedia.”

Later, Andraka would be cited as an example of why open access is important. Speaking to the Vancouver Observer about his reliance on free access to academic journals, Andraka said: “I used them religiously. Just because, in most online databases, articles cost about $35, and there are only about 10 pages.” If he’d been forced to pay subscription fees to read journal articles, his life would have been very different.

“I’m not a unique case,” he pointed out, speaking to the Right to Research Coalition. “There are millions of people like me, and so if you can just go on Google and Wikipedia and find these amazing articles, we could have this great innovation. But these paywalls are stopping us.”

“There are millions of people like me, and so if you can just go on Google and Wikipedia and find these amazing articles, we could have this great innovation.”

The issue of accessibility has become especially poignant in the context of the story of Aaron Swartz, the influential Internet entrepreneur and hacktivist who took his own life after being arrested for downloading thousands of JSTOR articles, which he planned to release for free. Swartz advocated for the kind of open access that allowed Andraka to begin his research. “I believe [Swartz’s] actions were mostly justified,” Andraka said in his Vancouver Observer interview. “The public funded a lot of that research. It shouldn’t be held inaccessible to the public.”

As some critics have pointed out, Andraka’s findings are yet to be peer-reviewed, and therefore his now-famous cancer test has still not been rolled out on a wide scale. However, his research is still widely regarded to be a breakthrough that, after more rigorous testing, could change the way we detect certain types of cancer and would be a major win for the open-access movement.