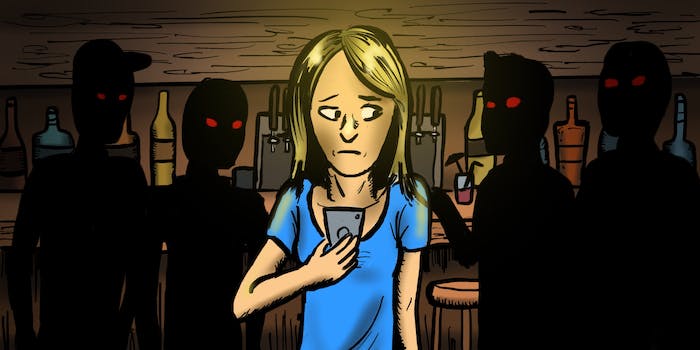 How safe is Tinder, really?

I’m currently on Tinder, combing through the profiles and trying to guess which guy the murderer is. Because, given everything I’ve learned in the course of dating and wondering, “Is Tinder safe?” it now seems statistically inevitable that at least one out of the thousands of puppy-slinging, fish-proffering, six-packed, mom-hugging men has killed—or will.

Alright, I’m exaggerating. Tinder would not appear to be a hotbed of violent crime. From a data perspective, though, it’s difficult to say whether or not Tinder is safe, per se. You do log in to Tinder via Facebook, after all.

As far as potential for bodily harm to users, Tinder is probably about as safe as any other internet platform intended for strangers to meet and chat and eventually have sex. And sure, any time you are talking to a new person online, it’s damn hard to know whether or not they are who they say they are. It’s easy enough to pull some fake profile pictures and slap a fake name on your profile. So easy, in fact, that there exists a whole television show dedicated to the concept of catfishing. But it stands to reason that any stranger you meet in the library, at a bar, or in your ceramics class could also be hiding some unsavory proclivities. And it’s important to note that violence is also a side effect of, well, dating and relationship abuse—especially if you identify as queer, a woman, or you’re a person of color.

British tabloid the Daily Mail reports that over 500 crimes have been traced to Tinder and Grindr, though it’s unclear if that number is the total in the app’s history and whether or not it’s everywhere or just in the United Kingdom. Tinder did not respond to our requests for information to confirm this number. But if that means 500 total out of the nearly six years the app has been around, I would take my chances.

However, if you set out to answer the question of Tinder safety, you’re also going to dig up a lot of alarming stories that may leave you looking at your chat history with extreme skepticism. Some serious shit has gone down thanks to Tinder, including rape, murder, stalking, and scams.

One thing that makes Tinder seem especially unsafe is the smattering of murders associated with the app. So far, I’ve been unable to pinpoint the exact number of murders in which Tinder has played a role, although there are some pretty gruesome stories available. Ranker completed and attempted murders orchestrated via the dating app, and recent years furnish a number of notable examples that do not speak to Tinder’s safety.

In late 2017, for example, 24-year-old Sydney Loofe of Lincoln, Nebraska met up with 23-year-old Bailey Boswell—and was never seen again. Loofe posted selfies to Snapchat announcing she was going on a date on Nov. 15, and failed to show up for work the next day. In early December, local authorities found her body, and while Boswell became the main suspect, her 51-year-old boyfriend Aubrey Trail eventually confessed to killing Loofe.

In June 2017, a young man named Joshua Stimpson stabbed a woman named Molly McLaren to death in Kent, England. Stimpson and McLaren dated on and off for about seven months after they met on Tinder. When she ended it for good, he started making threatening comments about her on social media. She informed the authorities and told those close to her she was worried about what he might do to her. Ultimately, he attacked her with a paring knife while she was sitting in her car.

And a man in Colorado is charged with murdering his wife after she found out he’d had a fling on Tinder. On March 1, 2015, Stacey Feldman received an email from a woman documenting a sexual encounter with Stacey’s husband, Robert. She told the Tinder date she was leaving him, and later that day was found strangled or suffocated in her shower with the water running. Police eventually closed in on Robert, who had taken out a substantial life insurance policy in his wife’s name months earlier.

From a sexual health perspective, too, Tinder is infamously semi-safe. While it’s true that any person you meet on the street could, knowingly or not, have a sexually transmitted infection, Tinder does present each of us with a much larger dating pool than we might immediately encounter in our communities, which theoretically means a lot more genital co-mingling.

And indeed, Tinder has been blamed for rising STI rates on numerous occasions. According to the New York Times, transmission rates for the most common STIs—chlamydia, syphilis, and gonorrhea—began climbing markedly around 2014, especially among young people. The Times noted that the trend could be linked to budget cuts for sexual health programs, or to the so-called “Tinder effect”: more strangers meeting and bumping uglies. Rhode Island has blamed its rising incidence of STI transmission on “high-risk behaviors that have become more common in recent years,” like for example “using social media to arrange casual and often anonymous sexual encounters.” There is even an app devoted to detecting your Tinder date’s STI status.

However, as Tonic points out, correlation does not equal causation, and there are other factors that contribute to the global rise in STIs. In the U.S., the war on reproductive health care could definitely be considered one: As conservative lawmakers shutter abortion clinics and their non-abortion provider affiliates, they also close off access to STI screenings, cost-free barrier contraceptives, and sex education that’s crucial in medically underserved communities. And while men who have sex with men do seem to be the ones most likely to contract STIs like syphilis, that might also be related to the rise of PrEP—intended to block HIV transmission—cutting into condom use. There are other factors at play here, even if it does seem, on an intuitive level, quite possible that escalating exposure to strangers would mean more chlamydia complaints.

In 2016, Gizmodo submitted a Freedom of Information Act request to the Federal Trade Commission to gauge precisely what kind scams played out on Tinder. Most of the worst stories shared one common thread: A dude claiming to belong to the U.S. Army is stationed overseas and, for whatever reason, needs money, iTunes gift cards, and nudes for blackmail purposes once the conversation moves offline (which tends to happen pretty quickly in these scenarios).

The app has also become host to bots designed to swindle people out of their hard-earned cash. You might recall the 2016 “Tinder safe dating” scam in which spam bots would ask users to click a link verifying their account, under the guise of creating a “safe” interaction. Vigilant users might notice a few suspicious signs that their chat partner isn’t human. For instance, super fast responses that don’t necessarily fit the flow of the conversation, pics that are too steamy for Facebook’s standards, or links to sites that either infect your device with malware or demand credit card information.

How can you make Tinder safer?

It’s hard to say that Tinder is somehow less safe than any other corner of the internet. Users should simply keep their common sense intact and maintain a baseline skepticism for the stranger sitting in front of them. For example, don’t complete a wire transfer issued by a stranger, or give that person any information that might trace back to your bank account. Ever.

When meeting up with someone IRL, choose a public space; don’t just give this stranger your address and invite them over for sex. Also, inform a friend of your whereabouts—a check-in system might seem paranoid for a casual date, but if you are reading this, you’re concerned enough about your safety on Tinder to ask the internet, so why not take precautions?

Also, consider reverse Google searching their photos: You can screencap their pics and upload them into Google images by clicking the camera icon that appears in the search bar. It might take some seconds to trace back to a Facebook account, but at the very least, if you can’t match any of their pics to a person with a web presence, you have reason to be wary. (Often, Tinder pictures will come from Facebook.)

If you and your Tinder date are texting, you can also search their phone number. If you know where they work, you may also be able to look them up on LinkedIn or their company directory. Basically, if you’re prepared to meet someone in person, I’m assuming they’ve given you some details about their life—fact check those if you’re worried. You have the whole internet at your disposal: for better and for worse, each of us comes with a huge catalog of personal information filed away on the web. At the end of the day, though, meeting a stranger on Tinder is potentially as unsafe as meeting a stranger anywhere. You never know what someone might do to you. We take our chances.