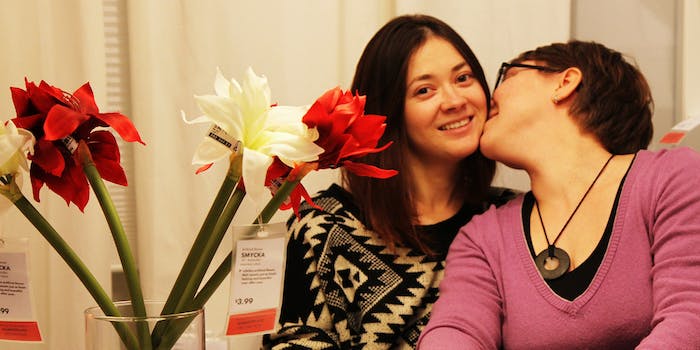 A story about a same-sex couple didn't run in the Russia IKEA catalog. LGBTQ activists responded with this.

Now you can browse IQEA, an online holiday “IKEA catalog” for the LGBTQ community.

In response to the Swedish furniture company’s controversial decision to pull an article about a lesbian couple in the Russian December issue of its Ikea Family Live magazine, LGBTQ protesters used a Brooklyn branch of the world’s most famous DIY furniture store for “a guerilla photoshoot” showcasing gay and lesbian families.

The original magazine article was nixed in part because of the laws in Russia, where, as of June 2013, “gay propaganda” or “any information about homosexuality” has been strictly banned. The story, which was removed only from Russian versions of the magazine, profiled Clara and Kirsty, who live in London with their son and run the popular parenting blog My Two Mums. An IKEA representative told the Huffington Post’s Gay Voices that the company was worried about “possible legal ramifications.”

The photo shoot was organized by Joseph Huff-Hannon, co-editor of OR Books’ forthcoming book Gay Propaganda: Russian Love Stories, along with Alexander Kargaltsev, a gay Russian artist and photographer who was recently granted asylum in the U.S., and Rusa LGBT co-founder Nina Long.

The photoshoot was used to create an alternate version of the company’s magazine called “IQEA.” The organizers told the Huffington Post, “Ikea should stop insulting their LGBT customers in Russia and around the world, show some backbone, and publish the story in Russian.”

In the online version of IQEA, labeled “furniture + progress,” one of the models, 39-year-old Oleg Jelezniakov, said:

“It’s ‘small’ decisions like these that sustain the large scale-ignorance and phobia towards millions of gay men and women worldwide.”

Jelezniakov, who received asylum in the U.S. in 2007, said,  “It’s that ‘little’ act of erasing that invalidates the very existence of many, only because of their sexual orientation.”