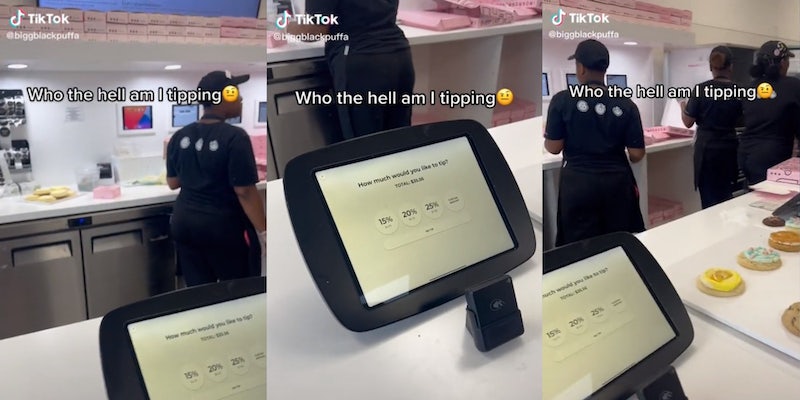 ‘Who the hell am I tipping?’: Customer calls out iPad tipping at Crumbl Cookies after there was no employee at the cash register to tip

Tipping service workers has always been a hot topic on social media, but some users say tipping has gotten out of hand. One TikToker posted a now-viral video showing that tipping has gotten so out of control that he doesn’t know who he’s even tipping anymore.

The TikToker, named Josh (@biggblackpuffa), shared a video showing an iPad kiosk asking him to leave a tip inside a Crumbl Cookies shop. In the video, several workers are seen standing nearby, but not manning the iPad or taking orders.

“Who the hell am I tipping?” the video’s on-screen text reads.

As of Wednesday, Josh’s video garnered 2.4 million views and a slew of comments on TikTok. Multiple viewers said they’re tired of always being asked for a tip by workers that aren’t restaurant servers or bartenders.

“Yeah honestly I’m totally for tipping servers but tipping culture has gotten out of hand,” one viewer commented.

“I quit tipping anywhere unless I’m sitting down at a restaurant. saves a bunch of money,” a second viewer commented.

“Tips are for people working for Less THAN MINIMUM WAGE,” a third viewer wrote.

A fourth said, “Agreed. If this is the case why aren’t we tipping the kids at McDonalds? Walmart employees? Dollar Tree? Etc. People who get tips: servers, bartenders.”

Some people said they don’t understand what some food service workers do to merit a tip.

“I be pressing no tip now. Like fine tip your servers/waiters/waitresses but… what did you do? Put the cookie in a box?” one user said.

“They be so bold… like what am I tipping for exactly?????” another user wrote.

Some viewers, who seemed to be Crumbl workers, voiced their thoughts on why they should be tipped.

“The workers cus we be making those cookies FROM SCRATCH,” one viewer commented.

“As a former employee ur tipping all 70 of us LMAO,” another viewer said, seeming to indicate that the workers share a tip pool.

One user suggested that Crumbl workers should advocate for better pay rather than ask for tips. “The employees complaining in the comments need to create a union then. The money paid for the product should go to y’all’s wages,” they wrote.

The Daily Dot regretfully covered this TikTok twice. Our earlier coverage is here.

The Daily Dot reached out to the creator via TikTok comment and to Crumbl Cookies via email.