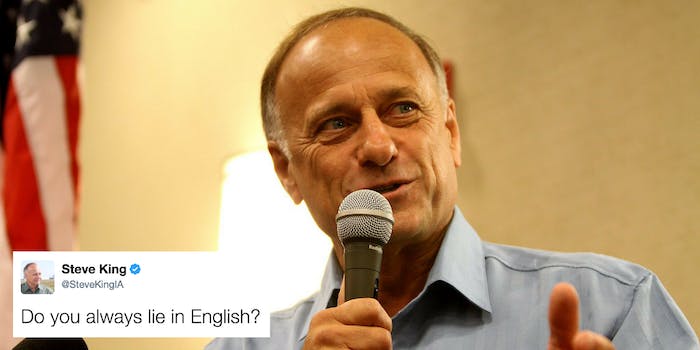 Steve King couldn't separate his foot from his mouth if he tried.

State Rep. Steve King (R-Iowa) mocked a Latina constituent on Twitter on Tuesday, but not before accusing her of lying that she had been blown off by one of his staffers for a meeting earlier that day.

According to the New York Daily News, Vanessa Marcano-Kelly, a board member of Iowa Citizens for Community Improvement, was harassed by King on the social media platform after tweeting about a meeting that King’s legislative director Jared Culver had missed with Marcano-Kelly and other members of Iowa Citizens.

Marcano-Kelly and the group had flown to Washington, D.C., from Des Moines, Iowa, to meet with Culver about Kelly’s behavior online, such as his distasteful tweet celebrating the deportation of Juan Manuel Montes, who is believed to be the first “DREAMer” deported under President Donald Trump.

When Culver left the group waiting 45 minutes, Marcano-Kelly aired her grievances with King’s staff, and inadvertently became the target of one of King’s racist tweets herself.

Do you always lie in English? https://t.co/4Rkyym7lhD

“Do you always lie in English?” the lawmaker asked, accusing the board member of lying and insinuating that she understood English poorly.

Marcano-Kelly, who speaks Spanish and French in addition to English, told the Daily News that the tweet was shocking.

“I felt targeted, attacked, and offended that you have this person who’s supposed to be representing Iowa, who has power, belittling you like that,” she told the publication.

Rep Steve King's staff no showed our 2pm meeting. Then King attacked one of our members on social media. Now we're bringing the meeting to him!

Posted by Iowa Citizens for Community Improvement on Tuesday, April 25, 2017

Iowa Citizens and Marcano-Kelly then went straight to King’s office to demand an apology. In a video recorded via Facebook Live, Marcano-Kelly calls out the staff for missing the meeting and for not taking responsibility for King’s offensive tweet.

After sorting out the misunderstanding with the meeting, Culver apologized for not showing up, saying he thought it was in a different location despite emailing Marcano-Kelly confirmation of the address. He also said that King was unaware of the meeting.

U didn't lie. No way to connect u2 the missed meeting. Next time just call. Glad all is cleared up. https://t.co/4Rkyym7lhD

King then tweeted that Marcano-Kelly wasn’t lying, and said he was glad “all is cleared up.” But for Marcano-Kelly, King’s so-called clarification is far from an apology.

“The fact that he targeted, that was very charged,” she said. “I think he’s proud of that hardline stance he has on immigration. He’s not going to change.”