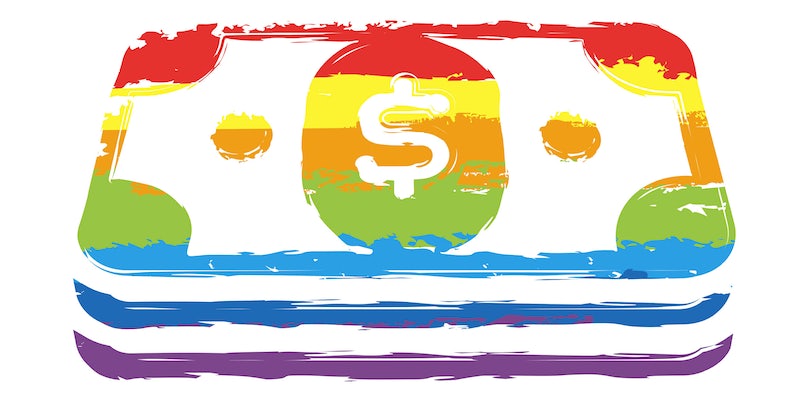 Grindr shuttering its queer news site is a loss—and perhaps a cautionary tale.

We need to talk about what happens when straight people buy queer businesses.

In late November, president of the queer dating app Grindr, Scott Chen, wrote in a Facebook comment, “There are people who believe that marriage is a holy matrimony between a man and a woman. I agree, but that’s none of our business.”

Scott is a straight man who’s apparently not into same-sex marriage even though he runs a dating company for queer people. This is also a company, until yesterday, that put out an award-winning digital magazine for the queer community called Into.

At the time Chen made his comments, Into reported on the controversy, an article which Chen then called “unbalanced and misleading” in a Facebook comment, according to Pink News.

“The reason I said marriage is a holy matrimony between a man and a woman is based on my own personal experience,” wrote Chen. “I am a straight man married to a woman I love.” He concluded his comment by saying, “I support gay marriage and I am proud that I can work for Grindr.”

Although Chen insists that he supports gay marriage, for many, this is simply incompatible with him saying marriage is between a man and a woman. In early December, the head of communications, Landen Zumwalt, resigned from Grindr, writing on Medium, “As an out and proud gay man madly in love with a man I don’t deserve, I refused to compromise my own values or professional integrity to defend a statement that goes against everything I am and everything I believe.”

On Jan. 15, it was announced the entirety of Into’s editorial staff had been laid off. The Into team put out a statement, saying in part, “We feel that Into’s closure is a tremendous loss for LGBTQ media, journalism, and the world.” Over the 17 months that Into was around, it built a large audience and received accolades from major LGBTQ organizations like GLAAD, the National Lesbian and Gay Journalists Association, and the Transgender Legal Defense and Education Fund. Grindr stated that these layoffs are a part of “a strategic shift to video,” but apparently did not desire to keep any of the original social or editorial team for that venture.

The “pivot to video” move has been common enough—and proven disastrous enough—in online media over the last half decade that it has its own Wikipedia page. However, the timing of the layoffs, in addition to the hole left in online media from one of the largest LGBTQ publications shuttering so suddenly, puts this instance in a different light: The straight president who queer and trans employees criticized remains employed by Grindr, while all of those queer and trans journalists are now without jobs.

So what is a straight guy doing heading a company that serves the queer community in the first place? Well, that wasn’t always the case. Grindr was founded by a gay Isreali man, Joel Simkhai, but he sold his remaining shares in early 2018, also choosing to end his time as CEO. The dating app now belongs to Kunlun Group Limited, a subsidiary of the large Chinese tech company, Beijing Kunlun Tech Co. Although Grindr was not free of controversy under Simkhai’s tenure, it could at least be said that the app was by and for queer men.

Grindr isn’t the first queer company to be owned and run by straight people, of course, and it certainly won’t be the last. Media giant Condé Nast owns the LGBTQ website them., and while there haven’t been significant cuts for that publication, many of Condé’s others, including the increasingly queer Teen Vogue have seen large layoffs over the past year. Outside of media, Pride events have been accused many times of selling out to straight investors and straight attendees, making it less accessible to and less focused on actual queer people.

When straight investors get involved in queer businesses, it can be a blessing and a curse. Allyship through financial support is valuable, and often necessary to keep a business going. However, when straight investors have financial control, things get tricky. For Chen and other straight Grindr executives, layoffs are just part of doing business. For the queer people they employed—and the queer who use their services and who depended on them for news about their community—it is another example of straight people shutting down yet another queer space.

Disclosure: The Daily Dot has syndicated stories from Into.