There are few surprises here.

It’s not unusual for Silvia Carrus to create comics about female and non-binary experiences. Her latest comic, titled “The Internet is Great (If You’re a Man),” is another great example—however, this time men were the ones who had something to say about it. The message in the comic is clear: We all love the internet, it’s a place we’re happy to be. But the experience can be quite fraught when you account for how heavily policed women’s opinions and physical appearance tend to be online.

Many recommended the post—as of this writing, it has over 200 likes—but in an ironic twist, a number of men decided to sound off in the comments and teach Carrus a thing or two about what it’s actually like here on the good ol’ ‘net.

As one commenter put it, Carrus is responsible for her experience and she should stop experiencing the internet from a “place of shame.” And he must know what he’s talking about because he’s been “surfing the net” for 24 years. 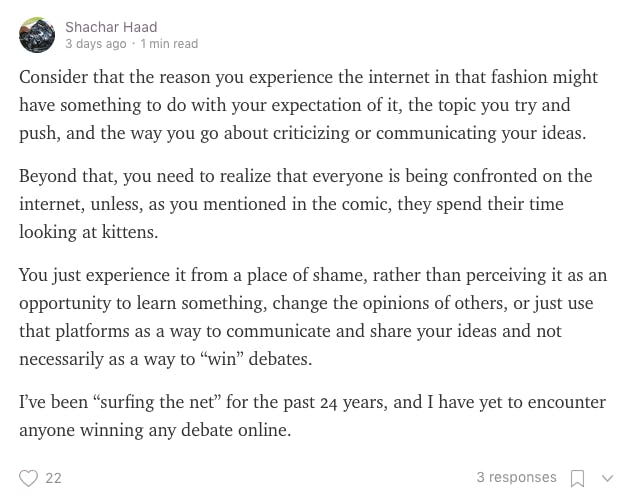 Another man, who refers to himself as a “Feminist Dad,” implied that Carrus is “weak” for feeling the way she feels. He also doesn’t believe in safe spaces. 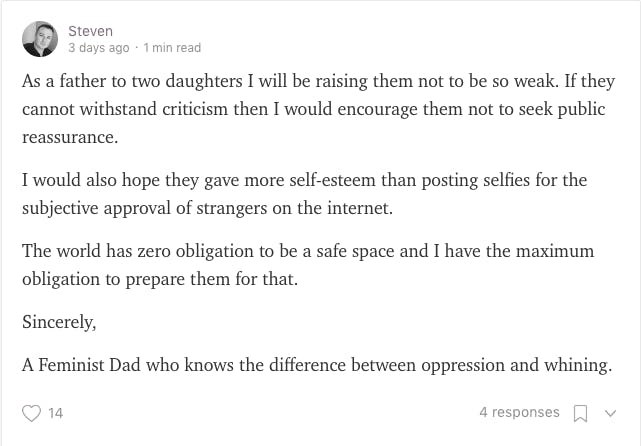 But others expressed frustration that Carrus’s post implies women are the lone targets of harassment on the internet. 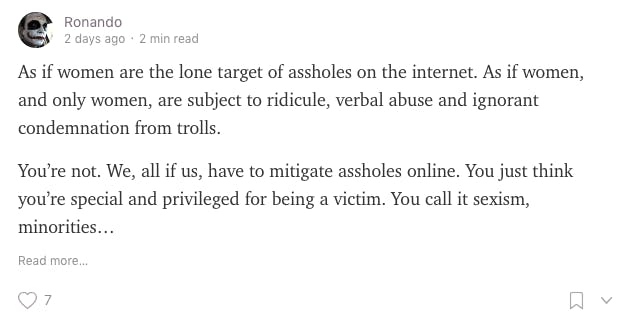 While it’s true that men can be the target of harassment, the idea that Carrus thinks she’s “special” is an astounding misinterpretation of the comic in question.

Carrus, whose comics can be found on Tumblr and Femsplain, told the Daily Dot, “It was created to parody exactly the reaction that it ended up receiving. It was largely based on the experiences of friends of mine who don’t identify as male and myself…”

Carrus added, “I’m well aware that online harassment isn’t restricted to these demographics, but my main intent behind creating comics about feminism is, of course, to discuss, often in a humorous light, issues faced by women and non-binary people.”

But for all the detractors in the comment section, many women were amused—and unsurprised—at how it all played out.

Others chuckled but were dismayed at how difficult it was for so many to understand the message.

Carrus said, while she’s no stranger to harassment, she was shocked to see so many comments from both men and women that “[brought] to mind instances of witnessing bullying and doing nothing about it due to the justification that ‘it teaches the child to be stronger.'”

She added that she wishes more people would, “Try to read it sympathetically, not defensively, and try to understand that you are not the only people affected by these issues. Nearly everyone deals with harassment online at some point, but nobody should ever have to. Harassing somebody who tries to highlight harassment won’t get you anywhere.”