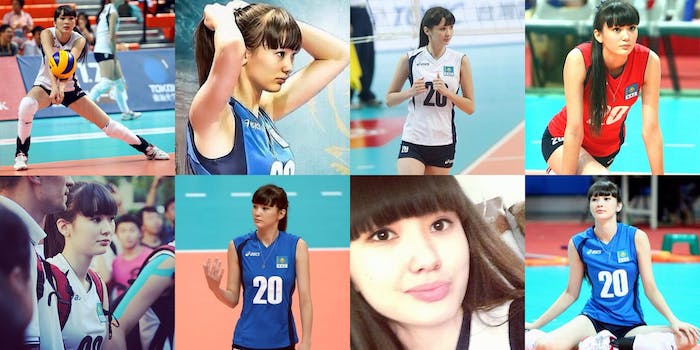 The Internet has a creepy crush on a teen volleyball player

When getting a real girlfriend is out of the question.

Quick hypothetical: Let’s say you’re an 18-year-old volleyball player for a Kazakhstan youth squad that competes internationally—how would you feel about becoming an object of unrequited lust from hundreds of thousands of strangers around the world? Not great, I bet.

This is the plight of Sabina Altynbekova, who became an Internet celebrity overnight when the Taiwanese media ran photos of her competing in the Asian Junior Volleyball Championship.

The newfound attention has taken many forms, most of them discomfiting. There have been at least two fake Twitter accounts, many pieces of fan art, and countless marriage proposals. The vast majority, of course, are directed at people pretending to be Altynbekova, not the athlete.

@altynbekova_20 hello sabina? Will you marry me?

In love with you sabina @altynbekova_20

hy @altynbekova_20.. :D I have finished drawing yourself, :D sorry, if I draw it bad #LoveSabinaltynbekova pic.twitter.com/zqwRF9TRmL

Altynbekova updated her Instagram page to clarify that she’s only active there and on Vkontakte (or VK), the Russian equivalent to Facebook, with any other accounts being phony. And while she considers the fixation on her “a bit much,” saying she’d like to concentrate on her sport, she’s mostly taking it in stride, even posting some of the illustrations she’s inspired.

Nurlan Sadikov, who coached Altynbekova in Taipei, told Tengrin News that the adulation annoyed him: ‘It is impossible to work like this,” he said. “The crowd behaves like there is only one player at the championship.” The good news for him is that these fandoms tend to dissolve as quickly as they form—we haven’t heard much about Natalia Poklonskaya lately.

For all the media coverage, however, virtually no reporter has mentioned that Altynbekova’s team was eliminated from the tournament in the quarterfinals. We’ll be happy if and when the Internet can one day congratulate her on something more than a pretty face and enviable figure.