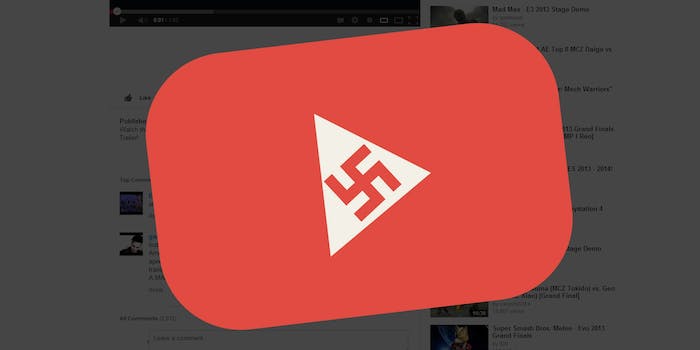 Nothing proves Godwin's Law faster than a stroll through the largest video-sharing site on the Web.

“The Jews are coming after your Internet. It’s the only place they don’t control. Where you are? allowed to criticize them.”

Would it surprise you that it took me only two clicks to find that quote, featured prominently on one of the most popular sites on the Web?

It was written by a commenter on a YouTube video, just a week old at the time, with more than 21,000 views called “The Jews Who Rule America.”

While most social networks strive to put a lid on the hate speech, YouTube’s lack of censorship or community moderation makes it possible for such prejudices to prosper.

Henry Blodget’s infamous Business Insider report, originally titled “Why Do People Hate Jews?,” tried and failed to offer insight on anti-Semitism. (“Hitler, for example, hated the Jews so much that he murdered 6 million people,” he wrote.) The article earned scorn from pretty much every non-BI site on the Web. Blodget, who is not Jewish, was asking an earnest, if ill-informed, question, but it’s one that presents itself time and again in the ugliest corners of YouTube.

I am Jewish. My grandmother survived the Holocaust. I attended Jewish day school and summer camp. Modern anti-Semitism may seem archaic, but it’s as visible online as the swastikas some neighborhood kids spray-painted all over our house when I was in the second grade.

Anti-Semitic communities represent the worst of YouTube. Just like Reddit, if not worse, YouTube mostly turns a blind eye to racism in the name of free speech, allowing vigorously uninformed and hateful comments to flourish.

Of course, YouTube’s Community Guidelines prohibit hate speech, defined as “speech which attacks or demeans a group based on race or ethnic origin, religion, disability, gender, age, veteran status, and sexual orientation/gender identity.” But one stroll through pretty much any popular video inevitably validates Godwin’s Law: “As an online discussion grows longer, the probability of a comparison involving Nazis or Hitler approaches 1.”

But it’s not just YouTube’s comment section—long considered one of the filthiest places on the Web—that’s inundated with accusations that the Jews own the banks and control the media. There are popular anti-Semitic vloggers, conspiracy videos, documentarians, “comedy” videos, and more.

Delve into one of the darker parts of a community mostly known for cat videos and there’s a thriving, terrifying world we’ve lulled ourselves into thinking doesn’t exist.

The former Grand Wizard of the Ku Klux Klan, David Duke, has a significant presence on YouTube, with more than 30,00 subscribers. He’s hosted an interview series, called “For Love of My People,” on the subject of white power, and another on Jewish thugs, “Israel: The Promised Land of Organized Crime.”

Keeping par with Duke is Brother Nathanael, who has more than 27,000 subscribers. He’s a prolific user, having posted more than 200 vlogs with titles like “When Jews Rule the World” and “How Jews Control the Elections.” A former Jew and now Orthodox Christian, Nathanael works to bring Christian principles to American life and to expose Judaism as a sort of “whistleblower.”

Nathanael and Duke seem to be the top anti-Semitic vloggers, but there are many others with less influence and views who make videos about hating Israel, or Ultra-Orthodox Jews.

Some people are just looking for a reaction, asking a “question” the way Blodget did. Corey Gil-Shuster, a Canadian Jew and Ph.D. student at the University of Haifa, often interviews Palestinians and Jews in Israel about the conflict between the nations. His questions have included:

His videos, though not anti-Semitic, often spark controversy in the comments and on his channel because of the raw and politically incorrect opinions of the people being interviewed. (He also interviews Arabs and Muslims about their feelings on Jews, even asking Blogdet’s question, “Why Does Everyone Hate the Jews?”)

Some of the responses are more political in nature, opening up the question of whether anti-Zionist sentiment is anti-Semitic and, as in this video of Jews talking about what they dislike about Muslims, if the idea of a Jewish state is inherently “racist.”

In the documentary sphere, there’s a music video called “The Court Jewsters,” which the uploader claims has previously been removed from “JewTube.” YouTube conspiracy documentaries are nothing new. (See the full-length cut of the “9/11 was an inside job” documentary Loose Change.) There are also older documentaries, such as this one denying the Holocaust, that get regularly re-uploaded.

A user named TheJewishQuestion, who posts many videos but only has 55 subscribers, created a three-part video series called “What Famous Men Have to Say About Jews.” It includes quotes throughout history from respected artists, leaders, saints, and philosophers defaming the Jewish people, essentially saying their ugly nature is inherent in their genetics.

Then, there are YouTube channels like JewishWorldOrderExposed, TheJewishLiesExposed and The Jews Run the World, which document the perceived Jewish control of Hollywood, politics, and the banking system. This eight-part series on “How the Jews Created Hollywood” is among the most popular.

There are also videos with high view counts that are little more than photos and clips collages of Jewish people working in Hollywood. They list out who controls what TV shows and movies get made, who are the top studio executives, directors, screenwriters, actors, and actresses.

And it’s not just Hollywood.

Videos like “Jews Run the World” and “Jews Did 9/11” show “proof” that Jews have malevolent, violent intentions in their control of the world. The Jewish Lies channel, for example, claims Jews were responsible for the bombings in London in 2005 and in Madrid in 2004. CNN covered the former video, and those like it, saying that one in three Americans believe 9/11 was an inside job and a percentage of that group online believed the Jews and/or Zionists were responsible.

Similarly, a channel called Jewish Crime Network keeps track of all the problems the Jews “cause,” including the firing of CNN’s Rick Sanchez for comments he made about Jews controlling CNN and all media networks on the radio show Stand Up With Pete Dominick.

Just type “Jews + Banks” into YouTube and the list of videos exposing the alleged Jewish control of the banking system is endless. Or try a video called “Anti-Gentilism” by Bilzerian Report. It uses pseudo-statistics to suggest Jews also run America’s higher education system—to the detriment of the white man.

There are also countless videos of ultra-Orthodox Jews interacting with non-Jews meant to portray the Orthodox in a less than favorable light, and more specifically, videos highlighting the tensions between black people and Jews, especially in the Crown Heights neighborhood of Brooklyn, where both sides struggle to coexist despite deep misunderstandings. The list could go on.

With over 100 hours of video uploaded to YouTube every minute, YouTube is incapable of monitoring all of the content on its site. In fact, it’s been estimated that it would cost Google roughly $38 million a year to do so—and that figure’s only going to continue to climb.