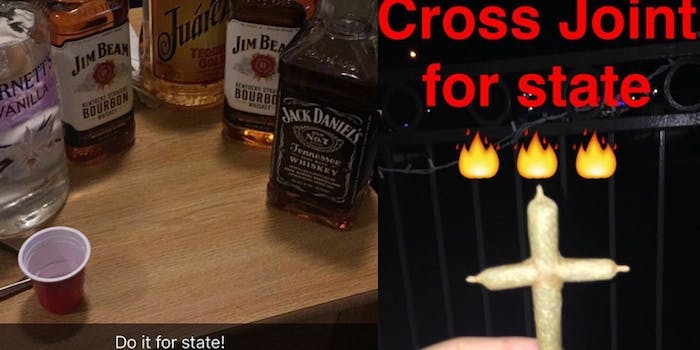 His cousin held the man at gunpoint.

An influencer has been found guilty for hiring his cousin to force a man at gunpoint to give up his website domain.

Rossi Lorathio Adams II, 26, was convicted of “conspiracy to interfere with commerce by force, threats, and violence” on Thursday, according to U.S. Attorney’s Office in the Northern District of Iowa. He faces 20 years in prison.

Adams started social media company State Snaps, which operates on platforms such as Twitter, Snapchat, and Instagram. There are still various accounts on both and Twitter and Instagram under the same and variations on the name, which show activities shared mostly by young adults engaging in “crude behavior, drunkenness, and nudity,” as stated by the Department of Justice’s report.

Adams, whose platforms reportedly had more than a million followers, wanted to take State Snaps to the next level, beyond social media, and have his own website. But doitforstate.com had already been purchased on a GoDaddy domain.

After failing to convince the owner of the domain over a course of two years to sell it to him, Adams hired his cousin Sherman Hopkins, Jr. to break into the owner’s home Cedar Rapids, Iowa, in June 2017. He sent with Hopkins a note that had instructions on how to transfer the domain. Hopkins went into the domain owner’s house with a stolen gun and took him to his computer at gunpoint. The owner, in trying to defend himself, ended up gaining control of the gun and shot Hopkins a few times in the chest before calling the cops. In the process, the owner himself had been shot in the leg. Last year, Hopkins was sentenced to 20 years in jail.

Many of the activities on Adams’ social platforms are captioned #DoItForState and are posted under different accounts. On Instagram, the #DoItForState alone has more than 100,000 posts under it. Instagram confirmed to the Daily Dot that it removed @doitforstate_ for violating its community guidelines. Twitter and Snapchat did not immediately respond to the Daily Dot’s request for comment.