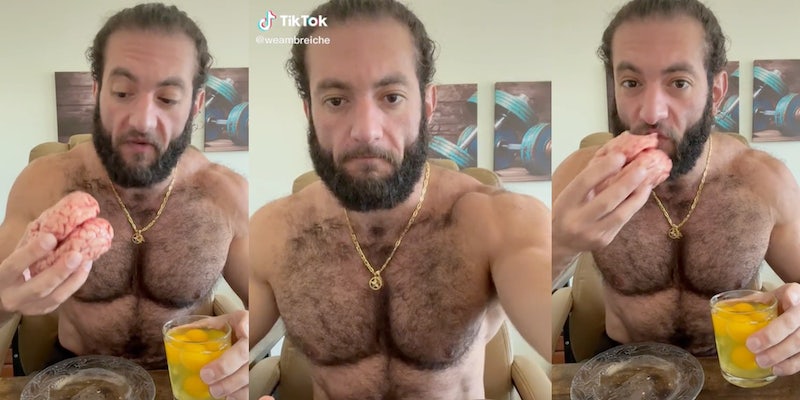 'Dude wanna be DIFFERENT SO BAD.'

A fitness influencer on TikTok is turning heads and stomachs after uploading footage of himself eating a “raw beef brain.”

The Los Angeles-based bodybuilder Weam Breiche uploaded video of the “high-protein” breakfast to TikTok on Monday and has since been flooded with countless reactions.

The video, which has been viewed a staggering 7.3 million times so far, surrounds the 31-year-old’s adherence to the Carnivore Diet. Followers of the diet only consume meat, fish, and other animal products such as eggs and dairy.

Countless users appeared disgusted by the meal, dropping sarcastic comments under the video in response.

“Dude wanna be DIFFERENT SO BAD,” one user wrote.

Others questioned the safety of the meal, which also included six raw eggs.

Breiche, according to the New York Post, claims that the 90% meat diet can “reverse diabetes, blood pressure, heart disease, and many autoimmune diseases.”

“I’m reading several books on being carnivore at the moment, and there are no complications to this diet,” Breiche declared. “You might risk bacterial infection, but a healthy gut is totally capable of destroying harmful bacteria.”

While there are many anecdotal claims online about the diet, experts remain skeptical at best.

Dr. Iddy Mughal, a popular TikToker with a masters degree in nutritional research, responded to the clip by pointing out what evidence actually exists to support the Carnivore Diet.

Mughal notes that although no long-term studies have been done on the diet, the nutrient profile suggests that some benefits could be present given the removal of all processed food.

But Mughal added that the diet also contains high levels of saturated fat and sodium, which can increase the risk of cardiovascular disease.

“It also lacks certain vitamins, minerals, and fiber from whole grains and plants and pathogens in raw meat like Campylobacter can make you extremely ill,” he added.

Some users responded to Mughal by claiming that they had noticed numerous positive aspects while on the diet.

In response to another user who argued that people should be able to ear what they like, Mughal drew a line between favoring certain foods and making unfounded health remarks.

“They can eat what they like,” he added. “What they can NOT do is publicly advertise that way of eating and make unsubstantiated health claims that could harm you.”

While the Carnivore Diet is growing in popularity thanks to people such as podcaster Joe Rogan and clinical psychologist Jordan Peterson, don’t expect animal brains to start showing up at every grocery store.

We’ve reached out to Breiche.