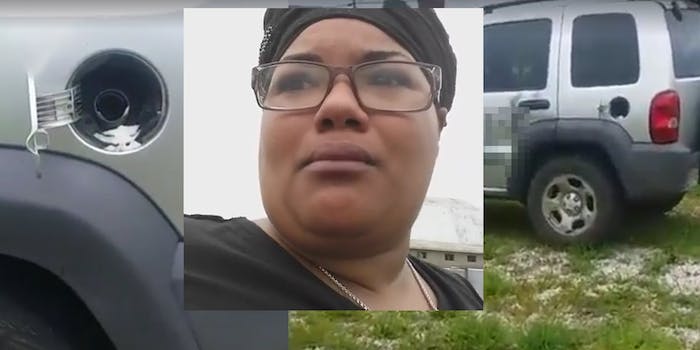 Last week, Mia Frias-Russell woke up to find her property had been vandalized with racial and misogynistic slurs.

In a Facebook Live video from her home in Campbellsburg, Indiana, Frias-Russell showed the audience her shed and car, both of which had been covered in graffiti saying “N—-r” and “B—h.” Frias-Russell appears beside herself in shock and sadness, and you can hear her muffled cries as the camera pans across her backyard.

“I don’t have any friends out here, so I don’t know who could have done this,” she said in the video, and mentions that the previous day she “almost got ran off the road.” She says the vandals also put sugar in her gas tank.

The police have been investigating the incident, and Campbellsburg Marshal Claude Combs said,  “This kind of stuff is not right, it’s not tolerable, and when we find out who did it, they will be charged criminally.”

The Daily Dot has reached out to Frias-Russell about the incident, but haven’t heard back as of this posting. Her video has had nearly six million views on Facebook, and she’s received an outpouring of support. On Facebook, she posted a photo of a flower bouquet sent from a well-wisher in California.

Brandi Nicole Dimas, who identifies herself as a friend of Frias-Russell’s, has also started a GoFundMe campaign for Frias-Russell, to help her move and get a new car. Dimas says Frias-Russell recently moved with her three kids to Campbellsburg “in hopes to raise her children in a better community,” but now she hopes she can use the money to “get out of that racist town.”

Some are accusing the incident of being a scam, even going so far as to suggest Frias-Russell staged the entire thing. Multiple people commented with a link to a Facebook video made by a woman named Antonia D. Bridges, suggesting the contents of the video reveal a different story, but that video is no longer live.

However, Dimas tells the Daily Dot over Facebook message that Frias-Russell was not looking for attention, and the video didn’t go viral until Dimas started sharing it. “They vandalized her house and her vehicle to no repair, and for people to accuse her of doing this herself is unreal,” she says.

Despite those few comments, Dimas says she’s otherwise been amazed by the outpouring of support. “I’m so happy that people are taking the time to listen to her story,” she writes. “Right now Mia is overwhelmed with emotions, good and bad. It’s unreal all the racism that is still around. It’s very sad and hurts my heart to know some people are full of hate without knowledge.”