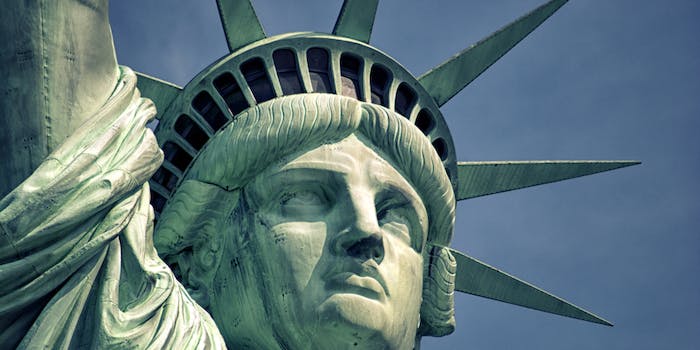 The Supreme Court on Monday voted 5-4 in favor of Trump's 'public charge' rule.

The Supreme Court on Monday voted to allow the government to deny green cards to citizens who might need government assistance programs, according to multiple reports. The move led social media users to ask whose ancestors would have passed the so-called “wealth test.”

The court voted 5-4 with the conservatives leading the vote, lifting a former injunction on the program, which President Donald Trump’s administration said in August it would be reviewing, according to the New York Times. While previous provisions of the “public charge rule” was applicable only to those requiring “substantial and sustained long-term” government assistance, and was instrumental in green-card application being denied to less than 1% of applicants, the new measure will include even those who require occasional and/or minimal government assistance such as Medicaid and food stamps.

Such strict measures would disqualify many immigrants, and advocates such as the Southern Poverty Law Center (SPLC) condemned the vote.

“The administration has weaponized [Department of Homeland Security] to make it harder for immigrants to find a home, build a family and participate in our society,” Sam Brooke, SPLC deputy legal director, said in a statement on Monday afternoon. “The rule is just the latest effort in the Trump administration’s relentless attack on nonwhite immigrants in our communities and at the border.”

Meanwhile, people took to Twitter to express their frustration with the ruling. Many shared their personal stories of how their own family wouldn’t qualify for the green card under the “wealth test” back in the day.

Sadly, i would not have been allowed to stay in America, prior to 1966, under this wealth test. https://t.co/0NVwkUchlW

My father and my uncles would not have been able to fight for America if there was a wealth test when my grandfather immigrated here.

Being poor is not a crime.

When my family applied for our green cards we were poor. We had NOTHING. We only had each other and my mother’s determination.

We were given green cards regardless of our economic status.

A wealth test would have barred my father and my mother’s parents from becoming Americans. https://t.co/rzBiJsN35M

Contrary to the American Dream. An insult to the global community.

My own family has diverse roots, and almost every ancestor would be barred under this disgraceful wealth test.

Next Congress we must take decisive action to re-establish our commitment to equal opportunity. https://t.co/8nGrSZTYxX

My mother came here in her 20s and as a college student. Went to a community college, a University, then got her Masters. Now she works as a financial director and makes $100,000 a year. A wealth test upon entry, is BULLSHIT https://t.co/1lx3dPoafB

Many asked, with America being a land of immigrants, how many of those involved in the decision-making would likely be here if the wealth test was enforced upon their ancestors.

I wonder how the 5 Supreme Court judges' ancestors would have fared on the wealth test?
I bet my ancestors would have had little more than
the clothes on their backs and the will to live free.
Beginning the first of generations of hard working productive patriotic Americans –

My guess is that most of the people who support this policy would not be here had their grandparents and great-grandparents been faced with a wealth test upon entering this country. https://t.co/loa6XguvMx

Many also quoted the “The New Colossus” poem that’s etched on the Statue of Liberty. Lines of the poem—”Give me your tired, your poor, Your huddled masses yearning to breathe free”—have operated as a tool for many advocates to remind the administration of American values.

It was either change the poem or this… pic.twitter.com/IzsUScaEKg

Mr President?…. “Your huddled masses yearning to breathe free, The wretched refuse of your teeming shore. Send these, the homeless, tempest-tost to me, I lift my lamp beside the golden door!" …. quote on the Statue of Liberty

In August, a Trump official said the “huddled masses” line in the poem was supposedly only about Europeans coming into America, which only lends to many people’s suspicions that the current public charge rule is specifically aimed at Black and brown communities.

We all know this wealth test is fundamentally about keeping Black and brown immigrants out of America. It's part of a broader white nationalist campaign to restrict all forms of immigration. And it's appalling. https://t.co/3AbCDVHZoJ

This is not only a wealth test; it’s a disability test. An immigrant who is disabled is more likely to live in poverty and to need health care. https://t.co/Ulhkuyo44Q

This policy is also known as ppl Trump deems at risk of being black or brown.

So if you're poor or middle class, but have a brilliant mind, you're not welcome.

But if you're rich and can get around paying taxes, come on in. @SCOTUS disappoints again.

Many outright said this is a result of electing Justice Brett Kavanaugh, whose nomination initially faced much scrutiny and backlash in 2018.

Next is a wealth test for voters.