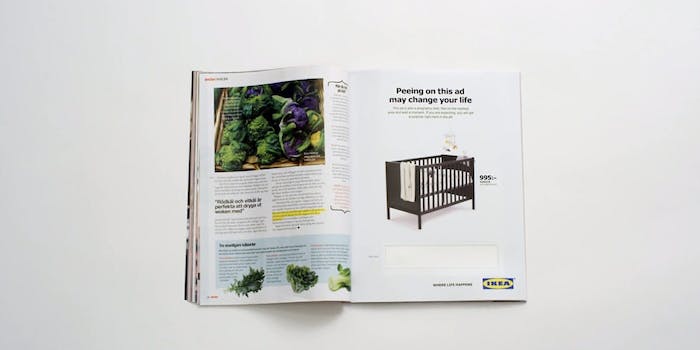 IKEA to pregnant shoppers: Pee on our ad to receive a discount

That's one way to get cheap baby gear.

IKEA is commonly known for two things: its meatballs and its affordable furniture—and maybe that adorable monkey. But a new PR stunt could make the company notorious for something you’d never guess in a million years: asking pregnant shoppers pee on an ad to get a discount on a crib.

The advertisement, which was made by Swedish ad agency Åkestam Holst and featured in Adweek, is currently running in Swedish women’s magazine Amelia. It includes a pregnancy test strip on the bottom for urinating on, not unlike a pregnancy test from a local drug store. If a customer’s urine comes out as positive, then the ad will unveil a steep discount on a baby crib. From there, all pregnant women (and men) have to do is take the dirtied flyer to a nearby store, and voila, they are the proud owners of a discounted crib!

Ikea wants you to pee on this ad and if you’re pregnant, it'll give you a discount on a crib https://t.co/MjuUiQSkZz pic.twitter.com/wAMXt8IdkJ

The pregnancy test strip isn’t just ripped from a random company’s testing kit, however. The technology was created by an actual medical facility, Medical Tech Lab Mercene Labs, and Åkestam Holst says technical advancements made from Mercene “have the potential to improve medical diagnostics.”

“In order to make the interactive functions of this ad work in reality, we had to make several technical advancements,” Åkestam Holst explained, Adweek reports. “The pregnancy test strip was used as a starting point, which relies on antibodies that bind to the pregnancy hormone hCG, resulting in a color change. For scaling up of this technique and adopting it to the physical format of a printed ad, Mercene Labs has used their experience in development of surface active materials for microfluidics and medical diagnostics.”

While baby stuff is expensive and discounts are welcome, there is something kind of gross (degrading?) about urinating on an advertisement in order to receive a discount. Despite popular belief, urine is not sterile, plus actively giving away body fluids to grab a discounted baby crib sounds like a premise out of a dystopian science-fiction film. But hey, if you’re looking for new baby furniture, now may be the perfect time to finally make an IKEA run.

Check out a making-of video for the ad over at Adweek.