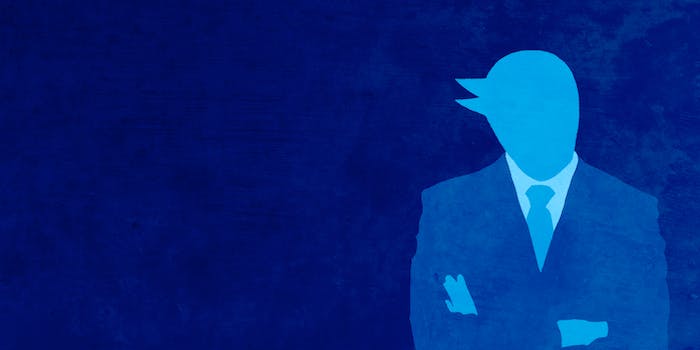 There'd be even more dick pics than there are already.

What would Twitter be like if it were a man? That’s the hypothetical question being posed in a trending hashtag this morning, and it’s resulting in, well, a lot of jokes at men’s expense. It’s OK, they can handle it.

#IfTwitterWereAMan it would make 30% more than its female counterpart Facebook

Started by @firstandmonday, who host the Hashtag Roundup app, #IfTwitterWereAMan contains a lot of stereotypical jokes (men don’t like asking for directions!) and things that don’t even make sense (really? You’d marry Twitter?). But a lot of the jokes are poking fun at the inequalities between men and women.

#IfTwitterWereAMan, women would reassuringly tell him his 140 character limit is just the right amount, but they secretly would want more c

#IfTwitterWereAMan it would fall asleep after a mind blowing tweet

#IfTwitterWereAMan he would follow everyone like a creepy stalker
And he would probably have problems with the cops pic.twitter.com/1kp8Lg2Sco

#IfTwitterWereAMan you'd get a whole bunch of tweets on one day, then nothing for a few days. Then just one that says "hey".

#IfTwitterWereAMan guys would get 280 characters, women would get 70.

In a lot of ways, this isn’t even a hypothetical. Twitter has a long history of not paying attention to the abuse of its women users, who endure harassing and threatening tweets. And how else do you explain all the dick pics?

Wait. It's not? Feels like it is with the amount of dic pics I get. #IfTwitterWereAMan