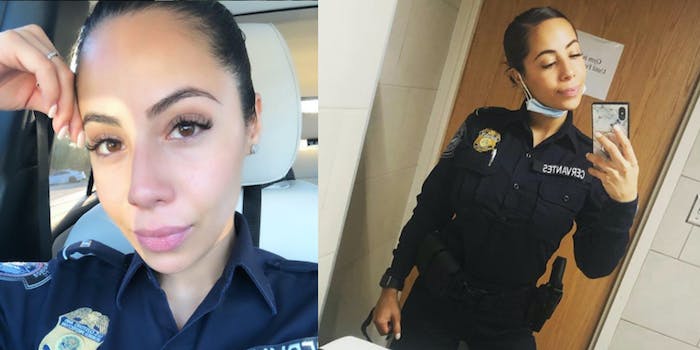 Remember #ICEBae? She has an OnlyFans now

Kiara Cervantes went viral in 2019 after being seen in a photo with Mike Pence.

The controversial public figure announced that she is offering explicit content to fans for $30 a month.

“Excited to get personal and closer to my amazing and loving fans!” her OnlyFans bio reads. “2020 has been rough, but hopefully I can be your reason to smile and push through these difficult times!”

Cervantes is a border patrol agent who went viral after being seen in a photograph by Mike Pence while he was visiting an immigration detention facility in Texas back in 2019.

People were split between simping over her due to her perceived attractiveness and hating on her due to her line of work. And after Cervantes’ announcement that she created an OnlyFans account, it would seem that she continues to be as divisive as ever.

“It’s insane to me that people would much rather spend money on (Cervantes’ OnlyFans subscription) instead of using that money to help people who actually need it,” one user tweeted, including the hashtags #LebanonExplosion and #HurricaneHanna.

Another called her OnlyFans the “best news in 2020.”

“Lmao bro I’m bout to get a refund ASAP,” another said.

Cervantes joined the platform on Aug. 7, and after three days, she tweeted that she was in the “top 0.6% of all creators.” Her page already has over 1,900 likes.