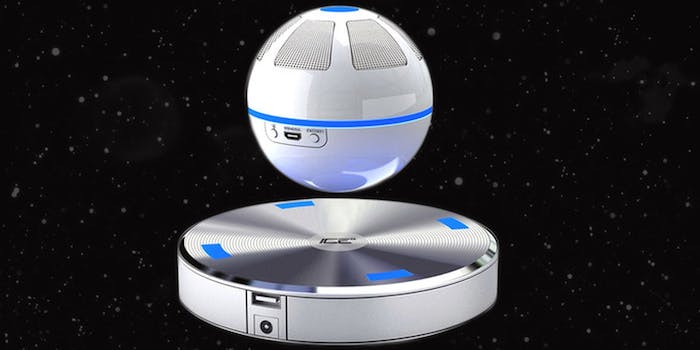 This floating portable speaker looks like a Death Star, and it’s $45 off today

For Tuesday only, the ICE portable floating speaker is $104.99 on Amazon, saving you $45 for a sound system that doubles as a work of art.

On its own, the orb is a Bluetooth speaker with NFC capabilities and 360-degree sound. It floats on a magnetic base, which has a built-in USB port. The base can charge your devices when plugged into a direct power source.

Reviewers claim the ICE speaker is no better than your average portable Bluetooth boombox, so this is not a sound system for audiophiles. But the speaker gets the job done, and plays up to 10 hours of music on a single charge.

Let’s be real, though. The design of this thing is out of this world, and that’s the real selling point. It makes a serious statement at parties or on your desk. Check out the deal here, while supplies last.