I found out who my cyberbully was—and I fought back

Everyone on the Internet has been cyberbullied. But my bully was closer to me than I thought.

The Internet can be a vicious place. I think anyone who’s ever posted a status or link on Facebook, or even commented on a piece from this website, can attest to that. It’s particularly vicious to those who express their opinions openly, whether that’s on social media or as a writer for an online publication.

I’ve been sharing my opinions on Facebook, Twitter, and Tumblr for years, and on the Daily Dot and other websites for a few months. I get negative comments and even hate mail all the time. So when I started getting harassing messages in my Tumblr ask box—remarks criticizing my sexual orientation and appearance—at first I didn’t question it. I figured it was just another troll.

Then something peculiar happened. A friend of mine, whom I’ll call “Lucy” (names have been changed), told me she was receiving harassing messages via her Tumblr ask box. When she described them, they seemed awfully similar to the ones I was getting. But because my friend doesn’t write for a public website, for her to get those kind of harassing comments seemed strange to both of us.

Lucy was determined to get to the bottom of this. So she signed up for a website called Statcounter, which can track the IP address of anyone who visits your site. She waited until she received another message. Then she figured out the IP address and location of the sender. To our enormous surprise, it was a friend of ours, Mary.

Lucy said she confronted Mary about it. Mary’s response was “I’m an asshole,” without bothering to explain herself any further. I didn’t understand why Mary would treat Lucy like that. It’s one thing to get that kind of treatment from some random Internet troll—but a friend? It just didn’t make sense.

I thought that was going to be the last time we’d hear from Mary. I was wrong.

When the messages started up again, they were innocent enough. First, I got teased for liking Christopher Nolan. 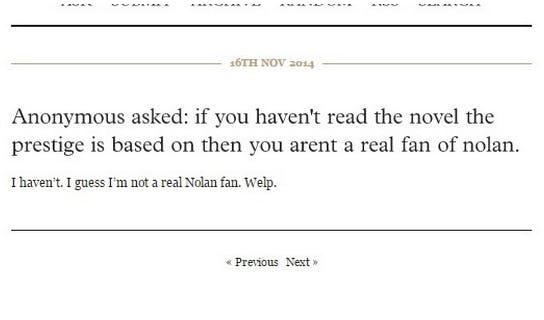 Then I got another message mocking my love for film composer Hans Zimmer.

(For what it’s worth, my place is very clean. I’m a bit of a clean freak.)

Then I started getting criticized for my appearance and sexual orientation.

Not to nitpick, but I’m actually bisexual, so the term “fag” was technically inaccurate. I was just getting over that comment, however, when I received the next one:

Which was followed by this one:

It was as if my bully, with each taunting remark, was pushing me to take my own life.

I’m a filmmaker as well as a writer, and I dedicated my last short film to my stepfather, who committed suicide a few years ago. My stepfather was like a father to me. He raised me like his son and he was the one who got me into movies in the first place. Unfortunately, he died before he could ever see any of my films. So reading that comment was absolutely devastating. It was as if my bully, with each taunting remark, was pushing me to take my own life.

I realized I first started getting these messages back in September of 2014. Then, for a short while, they stopped. While the last message I got was rather innocuous—it was a comparison of me to Sheldon from The Big Bang Theory—when I first read it, something clicked. So I signed up for Statcounter to see the IP addresses of people who visited my Tumblr. The next time I got an anonymous message, I checked the IP address and messaged Lucy, asking her to confirm if it was the same IP address that belonged to Mary. Lo and behold, it was.

Of course this was the same person that had been messaging both Lucy and myself for months. I felt like an idiot for not realizing it sooner.

For a while, I was trying to figure out how to proceed with this information. Should I just hit the “ignore” button on Tumblr and report Mary? Or should I give her a piece of my mind? After talking things over with Lucy, I decided I needed to let Mary know how I felt.

When I was in middle school, I barely spoke out about my bullies. I was too afraid I’d get into even more trouble, or that they would punish me for speaking out. When my mother finally learned what was happening, she took me to a meeting with the teachers. With her encouragement, I told the teachers what was happening. After I finished, the teachers looked at my mother and said, “It sounds like your son doesn’t belong here.” My mother was aghast. The teachers had basically refused to do anything about it.

Ever since then, I’ve been paralyzed with a fear of confronting bullies. But I decided that I wasn’t going to allow this incident with Mary to be a repeat of what had happened to me as a teenager.

I decided that I wasn’t going to allow this incident with Mary be a repeat of what had happened to me as a teenager.

After taking some time to think about what I wanted to say, I wrote a strongly worded letter to my cyberbully, who I was friends with on Facebook. In my letter, I addressed that I was hurt that she had been harassing Lucy and I for several months. It was even more hurtful knowing that it was a friend that was doing the harassing. While I had never been that close with Mary, the fact that I knew her made it sting more than if she had just been a random Internet troll. If you’re confronted with negativity on a daily basis from strangers, you shouldn’t have to face that level of harsh ridicule from your friends.

When I sent Mary that letter, I honestly didn’t expect to hear back from her. For me, sending that letter was more cathartic than anything else. It was a way to make up for what I couldn’t do when I was younger: Fight back.  But she responded within an hour of receiving my message. I was a little taken aback, but I was even more shocked by her response.

In her message, Mary admitted she was responsible for harassing me. This was her reasoning: “Between you and me, the reason I did do it to you and Lucy is because I was jealous. That and I just feel like I couldn’t hang around you guys anymore.”

She didn’t explain why she was jealous of us, but she didn’t have to: Mary is a filmmaker too, and if I had to rationalize it, maybe she was envious of how I was finally able to complete my last short film.

However, there was more. After Mary explained why she had cyberbullied me, she also said she wasn’t doing it alone. She admitted she had been doing it with yet another friend of ours, Amy. This is a truncated version of the message Mary sent me:

“Both Amy and I apologize for this. It’s a really long story but to put it short, I’ve stopped [harassing people] for a while and tonight it was actually Amy who sent you that. Amy and I tend to play jokes on people we know but I told her about the Lucy incident and we’ve stopped. At least, I have. You may have seen my IP address because I did creep on your Tumblr but I did not send that message. Amy and I are both in on this.”

When I read Mary’s message, I became paranoid. I started wondering who else on my Facebook friends list was harassing me. I remember scrolling through my friends’ list, trying to think of anyone else that might have it in for me. Mary tried to explain herself, though. She addressed in particular the question I asked in my letter: Why would you do this to your friends?

I remember scrolling through my friends list, trying to think of anyone else that might have it in for me.

“But you know, you’re right. I wouldn’t do this to people who I consider my friend,” she wrote. “I consider you an acquaintance. As to Lucy, I never really felt a strong friendship between us. Sure we had good times but nothing prominent. It sounds awful but it’s the person I am.”

Thanks to the Internet, it’s never been easier to connect with friends on social media. But it’s much harder to realize who your real friends actually are. Is someone you interact with on Facebook or Tumblr truly a “friend”? Or do they feel they’re bound by different standards than the “friends” they interact with in person?

Mary’s message ended with the following plea: “P.S. Can this just be between us three (OK, four)? Please? I think we should all just move on from this and go our separate ways.” Mary knows I write for an online publication, so I knew what that meant: She didn’t want me writing about this incident. But that wasn’t going to stop me.

You’ll hear this type of entreaty a lot from bullies: “Please don’t tell anyone.” They don’t want others to know about their shameful behavior. They want you to stay silent. But their victims shouldn’t give them that satisfaction. If social media was around back when I was in middle school, I might have been more inclined to reach out and tell my bullies how I truly felt. Now that I have spoken out to my cyberbully, I may finally have the courage to do that one day.