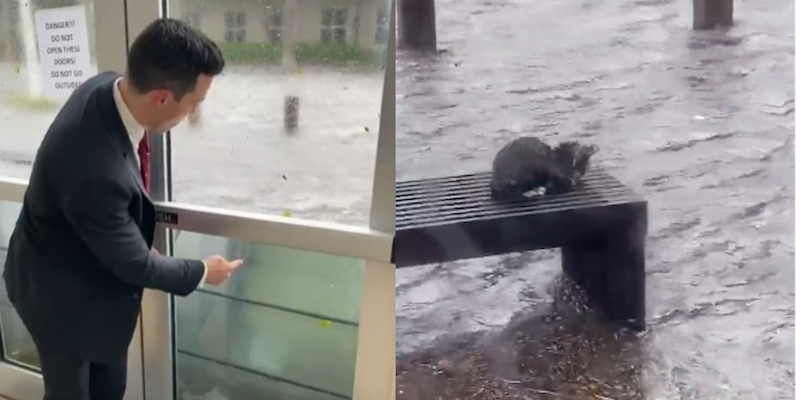 ‘Is there not enough misery already without using an animal in distress for clickbait?’: Weatherman fails to save kitten stuck in Hurricane Ian, sparking debate

'This man’s career was just ruined with one cat tweet.'

A meteorologist in Florida stirred outrage on Twitter after uploading footage of a stranded kitten during Hurricane Ian.

Dylan Federico, a weatherman for WINK News, shared video of the struggling feline on Wednesday while filming out the window of the news agency’s TV station in Fort Myers.

“Storm surge is rising rapidly outside WINK News,” he wrote. “A kitten is on the bench trying to escape the water. The doors are locked but we’re trying to get the kitten inside.”

Twitter users quickly flooded Federico’s replies with demands that he go outside and save the cat. But just as the kitten’s fate became a viral issue on the platform, Federico deleted the original tweet.

Federico’s account was bombarded with even more comments as a result, with users demanding to know whether or not he saved the cat.

“Why’d you delete the kitten tweet, Dylan?” one user asked. “DID YOU SAVE THE CAT!?”

Others were more aggressive in their remarks, ordering Federico to produce footage of the saved kitten to his Twitter account immediately.

“Your next tweet better be a picture of you standing in waist deep water inside while holding the kitten up above your head as it curls up in a warm blanket lapping from a saucer of cream,” another user said.

Federico eventually tweeted again but only mentioned an unrelated update about the hurricane, much to the anger of animal lovers following his timeline.

Many responded with memes while begging the weatherman to provide new information about the stranded kitten. Others mocked that his legacy had been tarnished.

The Daily Dot reached out to WINK News to inquire about the status of the cat but did not receive a reply. An email to Federico’s personal email also went unanswered.

The situation became more dire when meteorologist Ashley Ruiz, who works at a news station in Louisiana, claimed that she had been told that the kitten did not make it.

“One of my coworkers worked at WINK and she texted a friend there asking if the kitten got saved,” Ruiz tweeted. “Their reply was ‘I don’t think so.’ and then ‘It didn’t survive.'”

In remarks to the Daily Dot, Ruiz denied having any further information on the feline.

Users over on Facebook quickly found livestream footage from the news station that appeared to show that the cat was no longer sitting on the bench.

Federico would later limit his tweets to keep anyone who he didn’t follow from responding, but not before users shared viral videos of others who braved the hurricane in order to rescue animals.

The weatherman finally responded later on Wednesday and claimed that the cat had swam away.

“Right after the video was posted we attempted to get to the cat but it swam in a different direction out of view,” he said. “I waited to post an update in hopes we could grab it. Please take your companions with you when you evacuate.”

Brant Beckman, another meteorologist from South Dakota, attempted to defend Federico as well.

“Every door is locked with metal flood gates on the outside,” he tweeted. “Dylan kept an eye on the cat while they made every attempt to get to it even with those gates in place but this entire thing happened in a matter of minutes. Dylan loves animals. No one’s hurt about this more than him.”

Yet the responses did little to quell the internet’s anger. Many blamed Federico for carelessly filming the cat.

“Why did @DylanFedericoWX feel the need to share this knowing full well the kitten would not be rescued because of the metal flood gates?” one user asked. “Your station also retweeted. Is there not enough misery already without using an animal in distress for clickbait?”

Some even accused Federico of lying about the situation, suggesting that he had actually made no effort to help the feline.

“You want us to believe that the kitten bravely leaped into that moving water and swam in another direction at Olympic speeds that no one could grab it at?” another Twitter user asked.

The issue surrounding the kitten has since made its way to other platforms such as TikTok, where users are similarly criticizing the Florida-based meteorologist.

“You could have been the internets biggest hero, man,” one tweet added. “Way to be the biggest villain of the hurricane, Dylan.”

It’s unclear if a definitive answer on the kitten’s status will ever become known. The hurricane, which made landfall today, is said to be one of the most intense hurricanes on record for southwest Florida.