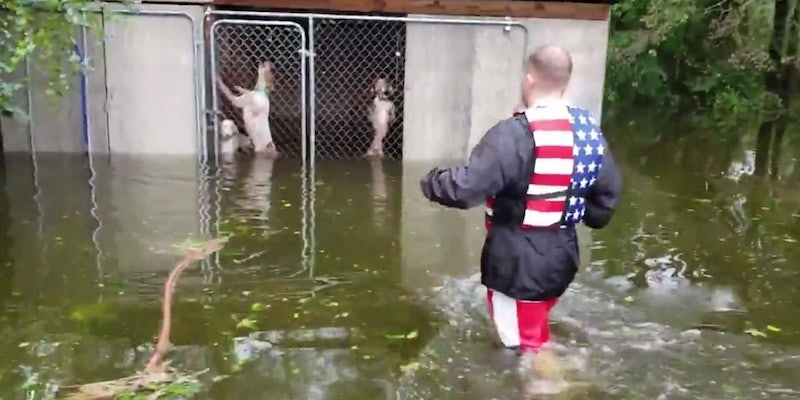 The video broke the internet's hearts.

Amid all the tragedy of Hurricane Florence, which pummeled the Carolinas this weekend and reportedly killed as many as 17 people, a man in Leland, North Carolina, showed a special rescue in a video that’s quickly gone viral.

A freelance reporter named Marcus DiPoala posted a video to Twitter in which he and another person rescue six dogs that were caged up and abandoned by their owners. As you can see, the water is about chest high on the canines, and their reaction to being released from their potential death cell is amazing to watch.

Rescued six dogs in Leland, NC, after the owner LEFT THEM locked in an outdoor cage that filled with flood water that was rapidly rising.

We got them out, but by the time we left, the water was so high that they would have drowned. BRING YOUR PETS WITH YOU! #HurricaneFlorence pic.twitter.com/tRibGxCjXy

As DiPaola wrote, “Rescued six dogs in Leland, NC, after the owner LEFT THEM locked in an outdoor cage that filled with flood water that was rapidly rising. We got them out, but by the time we left, the water was so high that they would have drowned. BRING YOUR PETS WITH YOU!”

“That’s a scared dog,” one of the men said as they approached the howling dogs.

As the dogs were released, he said, “Come on, puppy. It’s OK. Nice puppy.” The dogs eventually swim toward higher ground, and they seemingly couldn’t be any happier to have been rescued from their cage (it’s unclear what happened to the owner of the dogs and why they left their pets locked up amid the approaching storm).

As of this writing, the video had received nearly 2.8 million views on DiPaola’s Twitter account alone, and it had been retweeted more than 42,000 times and liked more than 115,000 times.

But these six pups weren’t the only pets to be saved in dramatic, potentially tear-jerking incidents.

The U.S Defense Department tweeted this video of the South Carolina National Guard saving a wary-looking dog from their garage.

And here are even more rescues, thanks to the U.S. Coast Guard.

The @uscoastguard just rescued a couple trapped in a trailer and about a dozen dogs in Columbus County, N.C. The dogs were swimming and barely above water when we got there. We ended up with a boat full of beagles! Check out the full rescue here https://t.co/MWGR8YyIu2 @USATODAY pic.twitter.com/jW34ON470J

This dog was barely above water when we got here in Columbus County, N.C. The @uscoastguard says they think they got here just in the knock of time @USATODAY pic.twitter.com/VoCBoQh5a0

Good Samaritans find two dogs stranded on porch amid rising floodwaters in Jacksonville, North Carolina, carry them onto their boat and bring them to safety https://t.co/3F9pcbVDDh pic.twitter.com/wbHW85ed7l

As terrifying as Hurricane Florence has been and though millions of people’s lives have been upended, at least the people in the videos above (and other people whose faces will never be seen on a tweet that goes viral) are showing their humanity by rescuing the helpless creatures who have been left behind.