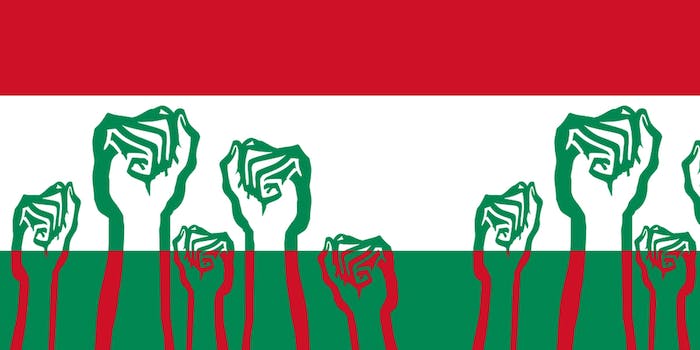 Hungarians take to the streets over new Internet tax

A tax on your data is bad enough, but this threatens to be so much more.

Tens of thousands of Hungarian citizens took to the streets on Sunday night to protest a proposed tax on getting online.

Critics say it’s both a threat to free access to information and a deliberate smokescreen distracting from other more serious issues facing the country. In scenes reminiscent of recent pro-democracy protests in Hong Kong, thousands of protesters flooded the streets of the capital Budapest—as well as smaller town, the Wall Street Journal reports—holding their cellphones aloft in defiance of the government’s plans to levy 150 Hungarian Forints ($0.60) on each gigabyte of data used.

Tapping into broader sentiment against Prime Minister Vicktor Orbán, the protests are, Bloomberg Businessweek reports, some of the largest since he came to power. While predominantly peaceful, prosters at one point attacked the ruling party headquarters in Budapest with old computer equipment, prompting 6 arrests.

Thousands of protesters in #Hungary #Budapest are demanding a halt to a proposed Internet tax https://t.co/4onadSSUUn pic.twitter.com/8YBwN1VAVr

The plans to impose the tax are about far more than economics, the protesters claim, arguing that it is instead a clampdown on non-government sources of information. Hungary has had a strained relationship with Europe under Orbán’s leadership, and the protest organisers told the Journal that “the move is part of the Orbán government’s increasingly repressive efforts to control and punish independent media and civil society watchdog groups through both legal and economic means.” They added that the legislation would “impede equal access to the Internet, deepening the digital divide between Hungary’s lower economic groups, and limiting Internet access for cash-poor schools and universities.”

In response to the uproar over that tax, the government has suggested a Ft 700 ($2.87) monthly upper limit—but some critics say the entire idea of an Internet tax is an attempt to divert attention from Hungary’s wider political situation.

One protester who spoke to the Journal said that the tax is a “red herring… so that people would stop talking about the U.S. visa-ban scandal,” referring to a recent U.S. ban of 6 Hungarian officials over corruption allegations. Protesters chanted “Free Internet, free country!” as well as “Viktor [Orbán], get lost! Viktor, get lost!”

As was the case in Hong Kong, the protests are predominantly organized over social media, with a Hungarian-language Facebook page coordinating protests racking up in excess of 200,000.