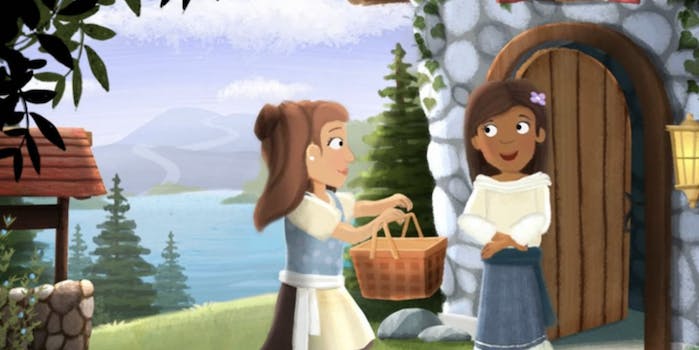 Get ready to cry your gay face right off.

Fairy tales usually follow the same centuries-old model: A poor kid becomes royalty, a vulnerable girl is saved by a handsome dude who then marries her, or a prince has to slay some kind of vicious animal in order to win the heart of a lady.

Basically, the stories told to kids are just about the most heterosexual things ever. And while that’s been slowly changing since the late 20th century with LGBT children’s books like King and King and Heather Has Two Mommies, the major cartoon studios have yet to catch up.

While Disney remains silent on whether it plans to #GiveElsaAGirlfriend in the upcoming Frozen sequel, Hulu has been quietly rolling out a series of LGBT-themed animated fairy tales from children’s book author and founder of Pajama Publishing, Daniel Errico.

Errico’s latest, Rosaline, hits the web just in time for LGBT Pride month. It’s a cartoon short about a strong-willed lesbian or bisexual character who bravely deflects a series of classic threats including a fairy godmother who wants to set her up with a prince. The story follows a traditional model that subtly references countless fairy-tale tropes like the wicked witch and the hungry wolf—except that Rosaline finds her way to her beautiful girlfriend at the end.

The heartwarming cartoon (this lesbian was moved to tears) hit Hulu on Tuesday and is Errico’s second for the platform, following up 2015’s gay tale The Bravest Knight Who Ever Lived.

Rosaline is voiced by Teri Polo, star of the groundbreaking LGBT-friendly drama The Fosters. In an interview with the Huffington Post Tuesday, Errico said that he believed “every child deserves the same chance” to grow up with stories that positively reflect their sense of self.

“Historically, kids’ media shies away from LGBT love, marriage and identity, which can cause an imbalance,” Errico told the Huffington Post. “We are missing an opportunity to foster children’s natural ability to accept and understand themselves and others, and that can have serious consequences later on in life.”