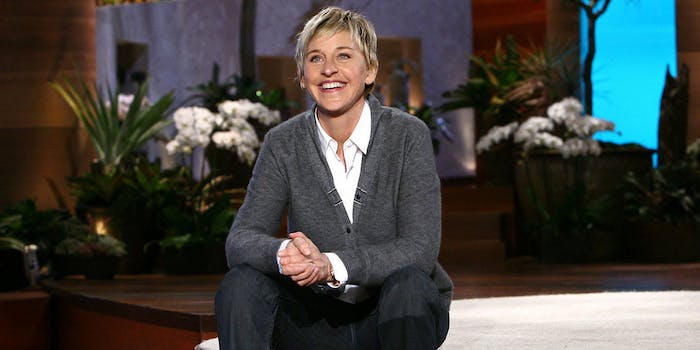 A quick and dirty guide to the subjunctive (for Ellen DeGeneres)

If Ellen DeGeneres were more up-to-speed on the subjunctive mood, she might not have tweeted this.

If Ellen DeGeneres were more up-to-speed on the subjunctive mood, she might not have tweeted this during last night’s Academy Awards:

The subjunctive mood indicates a hypothetical situation, something that’s not actually real, but something we really, really wish were true. If Bradley’s arm were longer, more faces—and thus more implicit spokespeople for Samsung—could have appeared in that photo. Unfortunately, Bradley Cooper has wee little T-rex arms, so the selfie looks poorly cropped.

Let’s face it: The subjunctive mood is no you’re/your, its/it’s, or there/their/they’re. It’s a fairly complicated and antiquated voice we were never required to master during grade-school grammar lessons. If you tweet the word “was” when you really mean “were,” as DeGeneres did, no one is going to publicly shame you—as one would, without fail, if you tweeted the phrase “Your an idiot.”

.@_Cooper @TimHerrera It should read you’re an idiot

Nearly 3 million people retweeted Ellen’s subjunctive error, though, and (at least in my feed) no one thought to send her a snarky reminder about the differences between the indicative and the subjunctive mood. That’s a good thing: She’d sound like a prick, and she’d also find it tough to explain the subjunctive in 140 characters.

The fun thing about the subjunctive is that not only is it easy to learn, but it applies to a wide variety of wishful thinking.

Here’s what might be the most well-known example of the subjunctive mood:

If I were a little bit taller, I’d be on the varsity squad.

The wishful thinking is easy to spot here. You’re on JV because you suck, not because you’re 5 feet 10.

Let’s compare this to the indicative mood, used to state that something is true:

When everyone else was my size, I was one of the best players in my school.

This probably isn’t 100 percent true either. But for all intents and purposes, the narrator is saying something factual. At one time, he was the same size as the star of the varsity team. This is a true statement. That did indeed happen. He’s not relating a hypothetical situation—he’s just griping.

Here’s another way to consider the subjunctive: the phrase “God bless you.” Here, the wishful thinking is that God will actually spew rad heavenly powers into your mouth because you sneezed. Really, though, you just spread germs to the person next to you, and God will do no such thing.

I wish I were with you right now.

Cute, but still wishful thinking, especially if you’re talking to an operating system. The indicative mood would recast the sentence as simply “I was with you”—a factual thing that happened.

Wishful thinking applies to all forms of online writing. Bookmark this article! If more people were to read it, we’d have a lot fewer viral tweets with grammatical errors. (Or is it “less tweeting”? We’ll save that for next time.)

Here are some GeoCities-era resources with more information about verb moods.