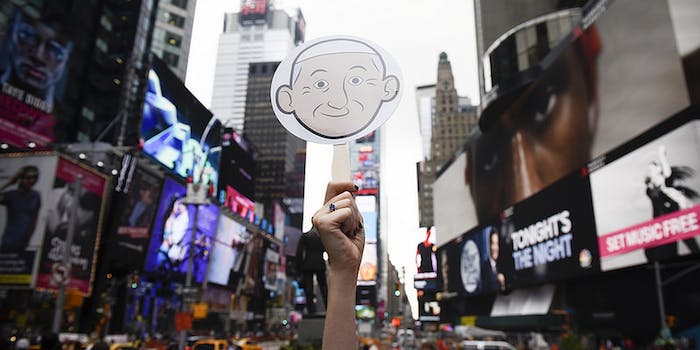 The 4 best ways to track Pope Francis’s visit to the U.S.

The pontiff's visit to the United States is sure to make social media history.

Pope Francis’s visit to the United States this week is sure to set off exactly the type of social media blitz you’d expect when one of the world’s most beloved religious figures steps foot on our great, selfie-obsessed nation. And every hour of the pontiff’s jam-packed itinerary in New York City, Philadelphia, and Washington, D.C.,  seems poised to go viral.

Pope Francis and President Barack Obama last met when Obama visited the Vatican. There will be a White House ceremony and a papal parade along the National Mall, and the pope will preside over mass at Madison Square Garden. The pope will also address the U.N. General Assembly and both houses of Congress, and finally get a chance to meet with Speaker John Boehner. For some variety, the pope will hang out with some lucky Harlem school kids, as well as inmates at a Philadelphia correctional facility.

In short, the pontiff’s apostolic journey across the East Coast is sure to elicit countless memes, GIFs, and a momentary takeover of both Catholic and secular Twitter. If you’re not one of the thousands of spectators who will have the opportunity to see the Pope in real life during his trip to the U.S., rest assured. Practically every moment of the pope’s historic visit will be livestreamed and made available to share on social media, thanks to the efforts of Catholic groups aimed at amping up the church’s digital presence. Aspects of the pope’s visit will be shared on Facebook, Instagram, Vine, Snapchat, and Twitter.

Why such a full-scale digital and social media push for the pontiff’s visit? According to Don Clemmer of the U.S. Conference of Catholic Bishops (USCCB), there was “no getting around having a major Web component” to the pope’s visit.

“The church goes where people are, and people are online,” Clemmer said. “There had to be a major web component, the video stream, the social media piece. It really wasn’t a decision so much as a necessity.”

Another reason for offering so many mediums to view and engage with the pope’s visit online is that while his itinerary is packed, there aren’t many ways for ordinary people to actually see him in-person this trip, with the noted exception of the Festival of Families in Philadelphia. Gone are the days when the pope would preside over mass in football stadiums to a crowd of thousands (far bigger than Madison Square Garden).

Clemmer applauds the use of social media as a tool to spread the Church’s gospel. “Every age has its own tools,” he said.

Here’s how you can follow the pope’s visit to the U.S. online.

All of the major events of the Pope’s visit, including masses, speeches, and processions, will be livestreamed on the U.S. Conference of Catholic Bishops website. Android and iOS users can also access livestream coverage, as well as news and photos through the free USA Catholic Church app.

The pope is scheduled to arrive today in D.C., but events don’t kick off until Wednesday morning, when the pontiff will be honored in a White House Ceremony. The pope decamps from Philadelphia on Sunday, Sept. 27, following a visit with the World Meeting of Families. You can view the pope’s full itinerary in all three cities here.

Organizations will also be providing separate livestreams for certain events:

9:15am ET — White House Ceremony and personal meeting with President Obama. Ticketed and closed to the public. Watch live here.

11am ET — Papal parade along the National Mall. Following the pope’s meeting with President Obama, the Pope will travel in his Popemobile along 15th Street, Constitution Avenue, and 17th Street NW. The parade is open to the public. Watch live here.

11:30am ET — The pope will join the bishops of St. Matthews Cathedral for a prayer. Event is closed to the public. Watch live here.

4:15pm ET — Mass of the canonization of Junipero Serra at the Basilica of the National Shrine of the Holy Conception. The pope will perform the first ever canonization on American soil. Event is ticketed but closed to the public. Watch live here.

9:20am ET — Pope Francis will address both houses of Congress in a joint meeting, the first pope in history to do so. Event is ticketed and closed to the public. Watch live on CSPAN or on Speaker John Boehner’s website, where you can also sign up for exclusive behind-the-scenes content on the pope’s visit to the U.S. Capitol.

11:15am ET — Visit to St. Patrick’s in the City and Catholic Charities of the Archdiocese of Washington. Event is ticketed and closed to the public. Watch live here.

6:45pm ET — The pope will lead the clergy of St. Patrick’s Cathedral in an evening prayer, also known as Vespers. The event is closed to the public. Watch live here.

8:30am ET — The pope will address the United Nations General Assembly on the topic of climate change. Event is invitation only. Watch live here.

11:30am ET — Multi-religious service at 9/11 Memorial and Museum and World Trade Center. The pope will pray at the 9/11 memorial site and then meet with representatives of world religions inside the 9/11 Memorial Museum for a multi-religious prayer and public address. Event is invitation only. The 9/11 Museum will livestream the event on Periscope.

4pm ET — The pope will visit with students at Our Lady Queen of Angels School, an elementary school in East Harlem. Event is closed to the public. You can watch live coverage on Fox 5 NY here.

6pm ET — The pope will preside over mass at Madison Square Garden. A slate of musical talent is scheduled to perform at a pre-mass concert at 3pm, including Jennifer Hudson, Gloria Estefan, and Harry Connick Jr. There will be choirs and speeches by bishops. Watch live here.

7:30pm ET — The pope will visit Philadelphia for the World Meeting of Families, a two-day program of events, including the Festival of Families on Saturday, which will be  hosted by Mark Wahlberg and include live music performances from the likes of Aretha Franklin and the Fray. Event is open to the public. Watch live here.

I ask you to join me in praying for my trip to Cuba and the United States. I need your prayers.

If you aren’t following @Pontifex, the Pope’s official Twitter account, it’s about high time you do. While the Pope often tweets only a few times a week, his trip to the U.S. will surely merit plenty of shoutouts. USCCB will be tweeting news and commentary through its Twitter account created exclusively to document the pope’s visit, @PopeInUS, and with its corresponding hashtag, #PopeInUS. A litany of pope-related hashtags have surfaced in anticipation of his visit, including #PopeisHope, #Goodiswinning, and regional hashtags #PopeinDC, #PopeinPhilly, and #PopeinNYC.

Be sure to give Catholic news organizations a follow, many of which will be covering events on the ground, such as Catholic News Service at @CatholicNewsSvc and the Catholic Sun at @SyrCatholicSun.

"…we saw two nations, estranged for so many years, take a step to bring them closer together." #PopeInUS #Cuba

USCCB has also launched an Instagram account to capture the pope’s visit, which you can find here.

Catholic PR Company Sports Media Challenge is also offering coverage on Instagram, Pinterest, and Vine on @PopeIsHope and Snapchat under the handle PopeIsHopeUS.

If you haven’t yet downloaded the Popemoji package, which include 52 pope-related emojis for practically every conceivable papal occasion, now would be a good time. 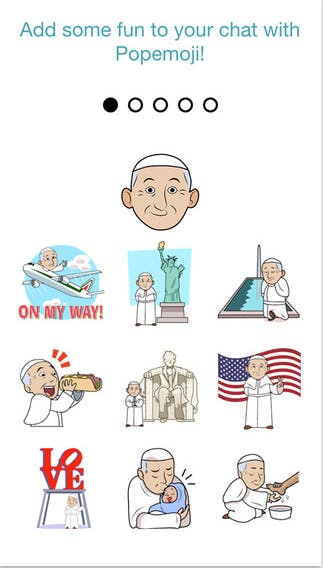