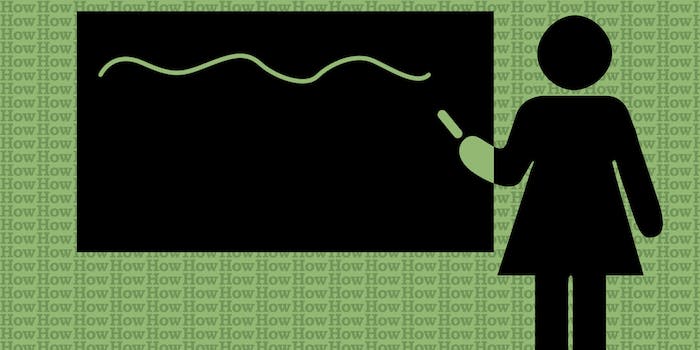 The 10 most inappropriate how-to guides on the Internet

You can learn how to do almost anything online. Some of it is messed up.

Thanks to the Internet, if you want to learn to give yourself a fishtail braid or do DIY floor varnishing or set up your TV or start a diet, there’s no shortage of guides. How-to articles and videos are plentiful online, and many of them are genuinely helpful. I learned to apply eyeliner like an adult woman thanks to, ironically, a teenager’s YouTube makeup tips.

Behold, the most inapproriate how-to guides on the Internet:

How to Stop a Wedding

If you want to Benjamin Braddock someone and you’re not into spontaneity, WikiHow has a surprisingly detailed and beautifully illustrated guide to stopping a wedding. The authors repeatedly suggest ways to stop the wedding without shouting down the bride and groom at the altar. But they do consider that an option. Things you’ll need, according to the guide, include “a prepared speech, wedding details, and the confidence to speak your mind.” 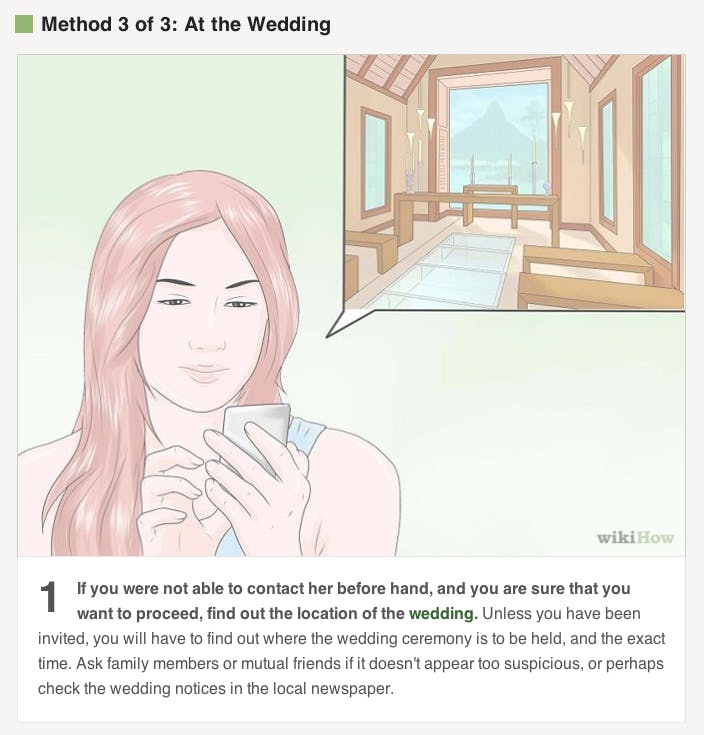 Most insane tip: The final step is “Enjoy life with your stolen bride or groom.” Though they do temper this with a warning. “Be cautious, however, as someone who is likely to walk from a wedding may be afraid of commitment, and insecure in relationships. This could pose problems for your relationship.” Ya think?

How to Hotwire a Car

This could be useful in some situations, like if you forgot your keys and have no way to call for help. But mostly it’s useful if you want to steal a car. There’s a detailed WikiHow guide, as well as a number of YouTube videos that show you how to hotwire a car using a screwdriver, a penny, and a variety of other materials: There’s even one that shows you how to hotwire a car with a dollar bill!

How to Make Meth

There are a lot of how-to guides that show you how to break the law spectacularly. While there are guides for selling almost any type of drug, since methamphetamine is relatively easy for individuals to make at home, there’s an especially robust glut of guides available that show would-be Walter Whites how to make meth, including some describing the dangerous “Shake and Bake” method, and others showcasing more traditional methods.

All of them describe a very, very bad idea.

How to Make a Bomb

There are a disturbing amount of bomb-making guides available online, including a number of YouTube tutorials with young people showing how to make cobbled-together DIY explosives. In related news, I’m now pretty worried what the government will think of my recent Google history, and I’m not showing you any of the links. Don’t make bombs.

How to Drink Your Own Urine

Drinking your pee is much less objectionable than building a bomb. But it’s still weird. Yes, in some cases, drinking urine might help one survive when trapped or isolated with no other source of water. But mostly it’s not a thing we need to do. That hasn’t stopped people from making how-to videos!

How to Become President

This might be the least helpful how-to guide of all time (except the last one on this list).

How to Get Revenge

Getting revenge is an awfully broad category, and different would-be revenge senseis have interpreted it differently. One man compiled a list of 100 Ways to Get Revenge. Good old WikiHow offers a wide variety of revenge-getting guides, from “How to Get Revenge on a Guy Who Was Mean to You” to “How to Get Revenge on Your Siblings.” The siblings guide suggests using Revengetool.com, a website that allows users to add email addresses to a list so spammers will barrage their inbox, which is both evil and kinda brilliant.

How to Fake Your Own Death

Most insane tip: “Don’t stand out.”

How to Stop Yourself From Killing Someone

Well, I guess this is a good guide since it wants to circumvent murderous impulses. But if you’re seriously struggling with the urge to kill someone, please close your WikiHow tab and go see a professional.

Most insane tip: “Stab a pillow instead.”

How to Dye Your Hair (NSFAE)*

This seems like a fairly innocuous topic, and unlike the others, there’s nothing wrong with dying your hair. Also unlike the other guides, this one is not sincere. The YouTube account behind it, HowToBasic, has gone from weird to weirder over the course of posting how-to videos, and this is by far the most bizarre. It’s definitely not a real step-by-step instructional video. It’s also something you cannot unsee. You are forewarned. This video is a nightmare. But, like one of those chain emails my aunt still forwards where you have to forward it or you are cursed, I feel obliged to spread the horror around.

*Not safe for anyone ever. I’m sorry I showed that to you.