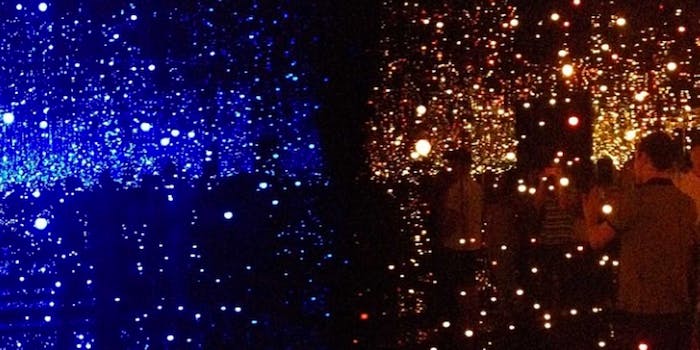 Got 6 hours to spare? Then you can take the hottest selfie of the season

Just don't go on the weekend.

For those of us who would rather prove, via selfie, that we were once in close proximity to art—instead of, you know, attempting to experience it—there’s no better place to be these days than Chelsea’s David Zwirner Gallery, which through December 21 is hosting “I Who Have Arrived in Heaven,” an exhibition of work from beloved pop artist Yayoi Kusama.

One part of the show in particular has captured imaginations, or at least generated a self-fulfilling hype: spectators have waited as many as six hours, and even longer on the weekends, for a 45-second turn in the “Infinity Mirrored Room—The Souls of Millions of Light Years Away,” and a fair amount of them have used their brief isolation in the starry chamber to take a photo of (what else?) themselves. As if the world of contemporary art needs yet another filter.

Instagram has seen a deluge of #davidzwirner and #yayoikusama selfies of late; most are taken in either “Infinity” or a similar mirror-paneled room, this one filled with speckled neon biomorphic forms, titled “Love is Calling.” What’s telling is that the reflective aspects of both, which disorient the viewer in space and impose a kind of introspection, have clearly made people feel like an essential component of each piece—which they are!

Unfortunately, it seems that most gallery-goers, when confronted with their own image suspended in a visually arresting context, can’t take a moment to consider the implications. Especially in “Infinity,” clearly designed to activate not only awe but awareness of our human insignificance, it’s the height of philistinism to place the focus on oneself.

It’s also something of a braggy privilege-check (very similar to the hoopla surrounding the selfies in MoMA’s Rain Room): look, I have leisure time to burn for a piece of genuine high culture, whether I understand it or not. Scrolling through these photos is a bit like watching a bootlegged Hollywood blockbuster in which the guy filming keeps turning the camera around so he can give you a thumbs-up. Oh, well—at least the room is empty at night.