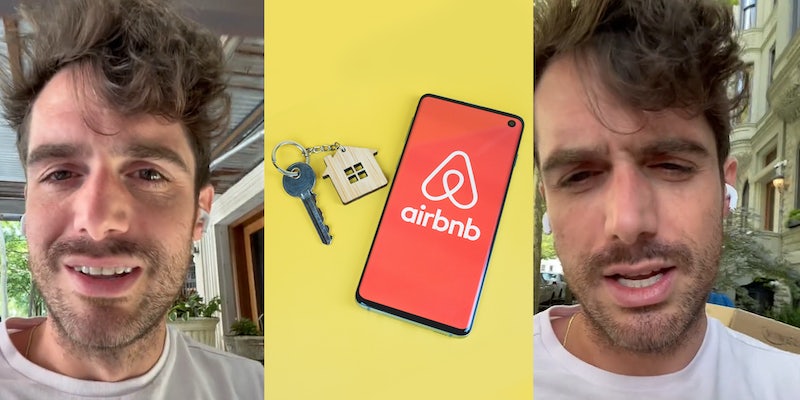 ‘Airbnbs have the audacity to charge the same as hotel prices’: Man shares why hotels are superior to Airbnb rentals in viral video

A man went viral on TikTok after sharing the differences between hotels and Airbnb, primarily focusing on customer service, entertainment, and cleanliness.

In the clip, popular TikToker Matt Buechele (@mattbooshell) explains why hotels are superior to Airbnb rentals.

“The disparity between hotels and Airbnbs could not be greater right now,” Buechele says, starting off the video. According to Buechele, hotels treat their guest “like a god” and “anything you need we got it for you,” to the point of “folding a hand towel like a swan.” Airbnbs, on the other hand, will make you feel like “you’re on a game show called ‘Home Invaders.'”

Another example of the differences Buechele details is access to entertainment. “You have HBO at every hotel. You’re watching it like it’s 1998,” Buechele says. “But at Airbnb you have Louise texting you, like, ‘the instructions for the Roku are on the kitchen table.’”

Lastly, the TikToker says checking out is a wildly different experience. Hotels “tell you to throw the damn towels on the floor,” whereas Airbnb will have you “strip the sheets, start a load of laundry, sweep the floor, [or] you’ll never see your deposit again.”

The video amassed 5.9 million views as of Friday, with many viewers adding examples to the slew of fees and rules most Airbnb rental hosts require.

“Don’t forget Louise also has a $100 Linen fee as well as a $350 Cleaning fee. But you have to do the laundry and dishes before you leave,” one viewer wrote.

“Hotels forever. I ain’t paying a $300 cleaning fee for that one bowl in the sink,” a third said.

Others shared their experiences with staying at an Airbnb.

“I had to take out the trash down a mountain in my car when I checked out of an Airbnb and they texted me to say I left 3 pieces of trash behind,” one person shared.

“We stayed in VRBO and spent 3 hours cleaning the place according to the instructions in the binder and then she gave us a 2/5 on cleanliness,” a second recounted.

“The last Airbnb we stayed at asked us to strip all the beds, start a load, take out the garbage,run dishwasher & checkout was 9am!” a third commented.

“I almost died at an B&B once bc the owner sold the house but kept it up on the app, I walked into someone else’s house as a brown man in Alabama,” another said.

Update 11:27am CT Oct. 31, 2022: After Buechele’s video went viral, he uploaded a TikTok the following day revealing that he was now a spokesperson for Hotels.com. His TikTok, which was a paid partnership post with Hotels.com, detailed a gift card giveaway by the brand.