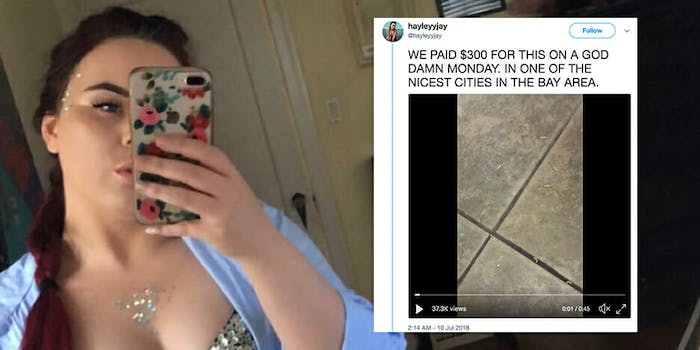 'HUNDREDS OF MAGGOTS IT SEEMS.'

Invoking bug infestation scenes of horror movies (think 1980s cult-classic Creepshow) and nightmares, popular makeup artist Haley Johnsen shared a terrifying hotel experience. In a Twitter thread, she described how she and her boyfriend discovered maggots crawling into their room from the walls in a Bay Area hotel.

Johnsen tweeted that she and her boyfriend checked into the Palo Alto Inn hotel around 9pm on Tuesday. The hotel is known for its modern style and heralded as one of the best spots to stay in Palo Alto, California, by travel websites like TripAdvisor and Expedia. Johnsen says it wasn’t her first time staying at the hotel.

Johnsen said after settling into the room, she decided to get into a relaxing bath. “As I’m sitting there, I see something… I’m like what is this tic tac on the floor…,” she tweeted. “Then I really open my eyes. Maggot. Maggot. Maggot. HUNDREDS OF MAGGOTS IT SEEMS. COMING DIRECTLY OUT OF THE WALL. ALL OVER THE BATHROOM.”

“At first I only saw the one,” she told the Daily Dot via Twitter DM. “But where there’s smoke there’s fire and they almost blended in. As I understood the gravity of it I went on auto pilot so I wouldn’t vomit. All I could think of was how quickly can we get every single thing we own out of here.”

WE PAID $300 FOR THIS ON A GOD DAMN MONDAY. IN ONE OF THE NICEST CITIES IN THE BAY AREA. pic.twitter.com/fR86V3Ytc5

She frantically called her boyfriend into the bathroom, who stepped on some of the maggots before telling her to get out of the tub, get her stuff, get out of the room. The swarm of maggots also made its way into the bedroom, practically covering the hardwood floor.

As if a bug-infested room isn’t a nightmare enough, Johnsen says that the hotel’s management wasn’t cooperative. She said the front desk staff was reluctant to offer any tangible solutions or a refund and even insinuated that the couple may have brought the maggots into the room with them.

Feeling at a loss for options, the couple contacted the local police. Johnsen said even the dispatcher was disgusted by the establishment’s behavior, and a cop agreed they couldn’t stay in the room. In her thread, she urged her 14,000 followers to complain about the hotel.

“CALL AND COMPLAIN. LEAVE VOICEMAILS. YELP THEM. RETWEET. AVENGE ME,” she tweeted.

“I don’t normally put things like that on them but I felt so disgusted, violated and appalled that there was no way I wasn’t going to share it,” she told the Daily Dot.

Her followers responded in abundance. Yelp and Google reviews exploded Tuesday, with users dishing out one-star ratings and negative reviews noting the infestation in the hotel.

The Palo Alto Inn has been working to delete the reviews, Johnsen said. According to a tweet in Johnsen’s thread, the hotel went from 129 Google reviews to 100 in less than an hour. While a business cannot delete reviews on their Google listing, it can flag or report the reviews as spam for Google teams to inspect.

Meanwhile, Yelp is “actively cleaning” the hotel’s page by removing any review that seems purely driven by recent events on social media.

Johnsen says the hotel blocked her and her boyfriend’s phone numbers but that she has received an email stating that a full refund will be issued for her room.

“It felt very too little too late and we’ll see if that actually happens,” she said regarding the refund. “They truly only bent because of the power (of) my followers.”

Johnsen later tweeted that she has reached out to the Better Business Bureau and the local health department to report the incident. She also told followers that the hotel’s 4+ star rating was now down to 3 and that the hotel deleted their company Facebook page due to negative reviews.

“I’m glad I was able to get my experience out there the way I did,” she wrote.
When the Daily Dot reached out to the Palo Alto Inn’s listed contact, we were told we had the wrong phone number.
Share this article