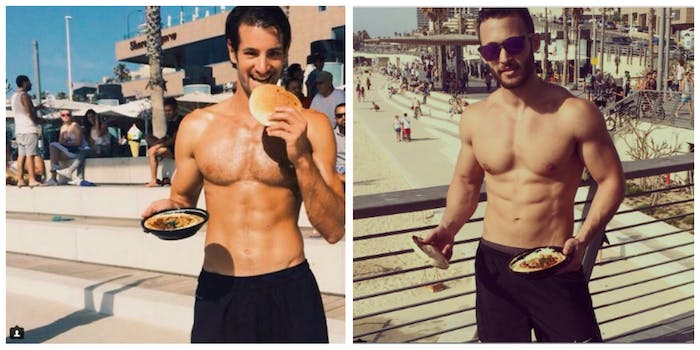 But the account, founded by four students at Israel’s Interdisciplinary Center Herzliya (IDC) as a project for their communications class, has a greater aim: to introduce the world to Israelis as normal people, dissociated from the Palestinian-Israeli conflict. “We want to create a positive association with Israel,” said co-founder Betty Ilovici, 21. “We’re normal people living normal lives.”

Though the Israeli government has attempted multiple positive PR campaigns, such as capitalizing on Israel as the Start-up nation, the Hot Dudes and Hummus team saw major shortcomings in these types of approaches. Instead, they were looking to target millennials worldwide, said Ilovici, who is originally from Romania. That’s when they realized that jumping on a preexisting trend—like “hot dudes”–and “making it our own,” would be their best bet, she said.

The group—which also includes co-founders Orly Geduld, 21, Ayala Lesser, 21, and Israel Zari, 23, who is the only native Israeli—finds their smokin’ male snackers by approaching people on their university campus, at hummus joints around Tel Aviv, and at Tel Aviv beaches. And so far, people have been pretty receptive to being featured on the blog.

Ilovici explained, “It’s going to give them a new profile picture, and they’re doing something good for their country!” People have taken to submitting their own photos as well.

But more than simply showcasing eye candy for eye candy’s sake, Hot Dudes and Hummus targets an audience of non-Israelis and non-Jews to combat the idea of Israelis as “the other.” The campaign wants to illustrate that Israeli millennials aren’t so alien—they go to the beach, they have fun piercings, and they’re pretty fit. The founders hope to engage their target audience “in content that’s apolitical about Israel that they like following,” Ilovici said. And they have. The account has amassed comments in English, Hebrew, Danish, Spanish, German, French, and, of course, emoji.

When asked about how the account would handle addressing the Palestinian-Israeli conflict, if and when commenters raise the issue, or the next time there is full-blown contention, Ilovici explained, “There’s no connection [between our account] to the conflict…it’s really not our goal,” she said.

And that’s fine, but Israel has a mandatory conscription law, which requires all 18-year-olds to serve in the military. Logic would dictate that most, if not all, the hot dudes have served in the Israeli army, meaning they were at some point, in the not so distant past, patrolling the West Bank or Gaza. Could foreigners, many of whom hold many strong preconceptions about IDF soldiers, see a picture of what could only be a former soldier without political prejudice? Even if the guy is more fly than Joseph in his technicolor dreamcoat?

Aryeh Genet, who was a featured hot dude after his girlfriend submitted his picture, pointed out a certain reality: “Find me a hot guy who wasn’t in the army,” he said. “In Israel, how can you do anything with 20-somethings without the army?” But that, he believes, doesn’t mean that everything to do with Israel has to be political—“it’s not,” he said.

Ilovici maintained that the project is solely about Israel devoid of the conflict, but she mused that “once we feel we’ve gained a certain number of followers, we want to experiment with images [for example, with] guys in IDF uniforms, guys in IDF T-shirts.”

Featured hot dude Omer Hadar, 26, feels strongly that the account can do more than that. “I think if they decide to keep it an Israeli thing, it should be able to show the real range of Israelis, from Jews to Muslims to other minorities in the Israeli community,” he explained. “Most of the photos were taken in Tel Aviv, which is known to be the cultural center of Israel, but is very deceptive in showcasing true Israeli diversity.” He suspects that if the founders are not mindful, the account could be susceptible to similar PR tactics and missteps as the perhaps infamous hasbara movement, a public diplomacy office that serves to boost Israel’s public opinion that has often been compared to propaganda.

The account also, as with all hot dudes accounts, raises the question of sexism and objectification as a marketing tool, which the Big Bang Theory’s Mayim Bialik, who has strong ties to Israel, pointed out when she re-grammed one of the hot dudes recently.

However, overall, the public feedback on the page has been overwhelmingly positive. User Sharonstreet commented, “I can’t stop looking at this page!” Other users, men and women, reacted in kind. “Probs going to meet my husband on this here Instagram ¯_(ツ)_/¯,” wrote kecortez.

Perhaps there really is some truth to the ancient mystical verse “make hummus not war.”