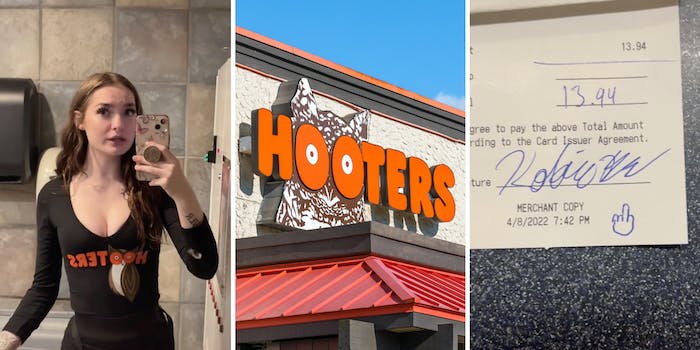 ‘Little boys are so annoying’: Hooters server says teens asked for Michelob Ultra, left her a middle finger drawing as a tip

'I charged them for their teas.'

A Hooters waitress sparked controversy in a viral TikTok after claiming a group of underage boys refused to tip her and drew a middle finger on their receipt after being denied alcohol.

The video, which has over 363,900 views and was posted by user @kenzjee, shows a Hooters waitress in the bathroom at work complaining about an experience she says she recently had with a group of young boys.

“This group of, like, 16-year-old boys just came and sat in my section, begged me for [Michelob Ultras], no IDs. And then, when I told them no and told them I could get them waters or anything else, they decided to draw a middle finger on my receipt and not tip me anything after they left,” the TikToker said in her video.

The video then shows a picture of a receipt for a $13.94 check, with no tip and a drawing of a hand sticking up a middle finger. The TikToker clarified why the bill was so low in a comment: “the tab is $13 bc they didn’t eat. they left. i charged them for their teas.”

“Little boys are so annoying,” the TikToker captioned the video.

Hooters is a restaurant chain that, despite being family friendly, is infamous for “hooters girls”—the servers and front of the house staffers for the restaurant, who are expected to wear tight clothing, orange shorts, and makeup to “entertain” customers, according to Mashed.

In the United States, it has been illegal for those under the age of 21 to drink since 1984. Teenage drinkers can face misdemeanor charges and community service hours if they are caught. But regardless of the law, alcohol is the most commonly used substance among young people in the U.S., according to the Center for Disease Control and Prevention.

Restaurant and bar employees can be criminally prosecuted for serving alcohol to underage customers. While charges vary state-to-state, typically servers will face misdemeanor charges and thousands of dollars in fines. In Texas, for example, serving alcohol to a minor is a class A misdemeanor, punishable by a fine up to $4,000 and/or jail time of up to a year, according to the Texas Alcoholic Beverage Commission.

The viral video sparked debate in its comment section about how servers are expected to handle underage drinking. Many users dissed the teenagers and came to the server’s defense.

“Guys turn 16 and get a single hair on [their] chin and think they can pass for 21,” one user complained.

“That is messed up!” another commented.

Others said that the teens should have been removed from the building immediately after they made the illegal request.

“That’s where you kicked them out immediately,” one user commented.

“The restaurant that I worked at would kick people out and not give this a chance to happen,” a second responded.

However, a few people in the comments argued teenagers should actually be allowed to drink.

“Stop accepting tiered adulthood as the norm…literally 99% of all the other countries allow alcohol at 18,” one user argued.

Legal drinking ages around the world vary, although the majority of countries prohibit drinking until around the age of 18, according to CNN.

The Daily Dot reached out to user @kenzjee via Instagram message, and to Hooters via email.