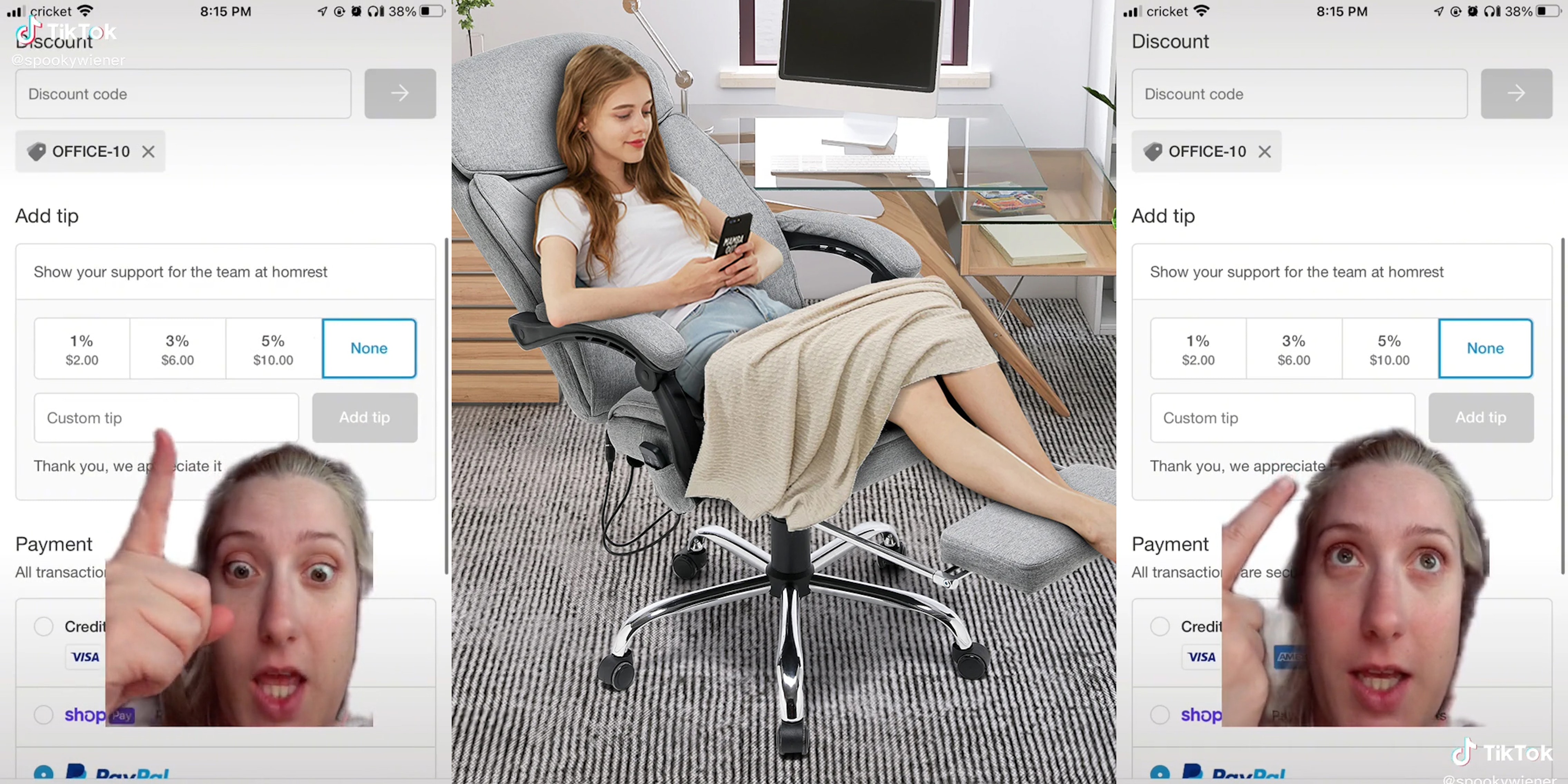 ‘Saw this one time when I was BOOKING A HOTEL’: Homrest customer gets asked to tip while online shopping for office chair

'I would literally have to cancel for the simple audacity of them.'

In the latest iteration of tipping culture possibly having gone too far, a customer who was online shopping at furniture company Homrest said that when she went to purchase an office chair, she was asked to leave a tip.

In a video that has been viewed more than 300,000 views on TikTok, poster @spookywiener says: “I’m purchasing an office chair online, and they’re asking me if I want to leave a tip.” The superimposed order screen featured in the video suggests she leave a 1% tip of $2, 3% tip of $6, or 5% tip of $10.

According to the order screen, @spookywiener, who has over 59,000 followers, used a discount code on the order.

“Like. I’m using a discount code,” one viewer in the comments section pointed out. “No I don’t want to tip.”

While the order screen notes the tip is going to the “team at Homrest,” many were still confused as to who exactly the tip would be going to. Some argued that businesses like this have to rely on the generosity of customers as labor practices in the U.S. allow them to pay workers a “decent salary.” Others shared their personal experiences with being asked to tip for what they feel are services that don’t warrant tips.

“Saw this one time when I was BOOKING A HOTEL,” one said.

“I literally got a self serve frozen yogurt the other day and it asked if I wanted to tip,” another wrote. “It’s self serve and I know damn well the cashier makes hourly.”

Being asked to tip at fro-yo shops commonly attracts criticism. Even a worker spoke out against the practice in June, arguing “I wouldn’t tip me either guys it’s okay.”

@spookywiener, along with viewers, can’t seem to get behind the idea of being asked to tip while online shopping, either. In response to the top commenter, @spookywiener revealed that she canceled the order due to “the simple audacity of” the company.

The Daily Dot reached out to Homrest via email and to @spookywiener via Instagram direct message.