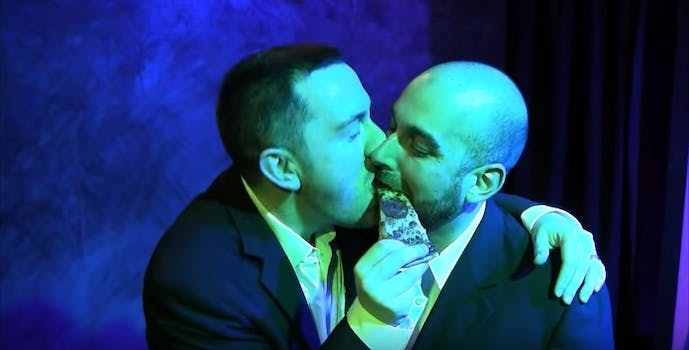 Even the staunchest of bigots make mistakes, and that includes father/daughter duo Kevin and Crystal O’Connor who made headlines last spring when they announced that their family business, Memories Pizza, would not cater the weddings of same-sex couples. But now it appears that they’ve inadvertently done that very thing.

Comedian and actor Robin Trevino recently drove more than 80 miles from his home in Chicago, Illinois, to visit Memories in Walkerton, Indiana. He bought two large pizzas, drove them back to Chicago, and served them the next day at his wedding to husband Jason Delgatto, documenting the whole adventure on video. Since he posted the video to YouTube last weekend, it has been viewed more than 80,000 times.

“I actually had my wedding ceremony here in Chicago back in 2008, but that was not a legal ceremony,” Trevino explains in the video. “We did it for our friends and family.” The ceremony and reception that Trevino and Delgatto held last weekend was their official legal ceremony and vow renewal.

The video shows Crystal O’Connor behind the counter when Trevino places his order. The camera pans down to show the tip jar, but Trevino doesn’t drop his change in it, given that the pizzeria had already raised nearly $200,000 on GoFundMe in April.

Trevino and Delgatto’s guests were delighted by the stunt; toward the end of the video, friends and family are shown eating the pizza and congratulating Memories Pizza for catering their first same-sex wedding.

Anticipating the criticism that his actions have only resulted in more publicity for the pizzeria, Trevino told The Huffington Post that he stands by his decision to make a visible statement:

“There has been some criticism that I gave them money and more attention…I was there on a random day, and they still get plenty of attention. There was a couple, during my 20 minute experience inside Memories Pizza, that were praising Crystal O’Connor for her beliefs. They assured her they only came because they saw her on the news. They asked if she signs a lot of autographs, and she confirmed that she does. It was worth the $27 I gave them to make a statement, and to break their winning streak.”

Trevino wrote on Facebook that he wanted the O’Connors to find out about his video. They did, but they are declining to publicly comment on the memories they helped create.