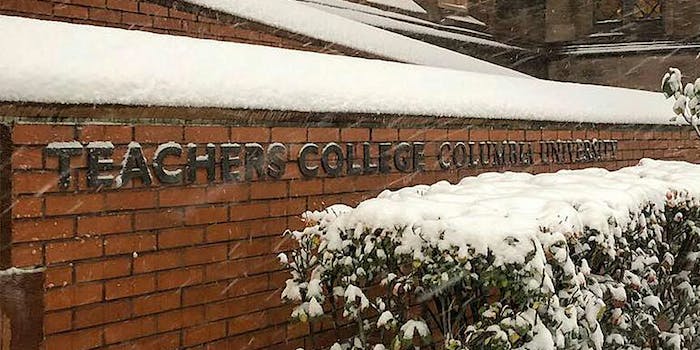 The professor believes the crime is part of a 'changing culture' and rise in anti-Semiticism.

The office of Columbia University professor and Holocaust scholar Elizabeth Midlarsky was vanadalized with swastikas on Wednesday.

Midlarsky found the anti-Semitic graffiti on the wall in the entryway to her office in the Teachers College building, along with a derogatory slang used against the Jewish community, around 1pm on Wednesday. She then reported it to campus security, according to the Columbia Spectator, the university newspaper.

The NYPD’s hate crime unite is currently investigating the issue, Detective Martin Brown told the Daily Dot. “It’s being classified as a ‘criminal misfit,” he said.

He confirmed the NYPD was notified around 1:30pm on Wednesday about “two swastikas written on the walls inside the location.”

“I was in shock,” Midlarsky told the Columbia Spectator. “I stopped for a moment, because I couldn’t believe what I was seeing.” (Midlarsky did not respond to the Daily Dot’s request for comment as of this posting.)

“Horrific alleged act of #antisemitic hate. We have seen so many examples of painful #antisemitic vandalism over the past month and year across the region and it is becoming #normalized,” the Anti-Defamation League (ADL) New York posted on Facebook this morning.

“We unequivocally condemn any expression of hatred, which has no place in our society,” Thomas Bailey, president of Teacher’s College said in a statement on Wednesday. “We are outraged and horrified by this act of aggression and use of this vile anti-Semitic symbol against a valued member of our community.”

Midlarsky, a professor of psychology who focuses her research on Holocaust, faced a similar incident more than 10 years ago. In 2007, her office door was spray-painted with swastikas and she received “anti-Semitic materials” in the mail, including a “demeaning” cartoon and a book denying the Holocaust.

Wednesday’s incident took place a bit over a month after the shooting of 11 victims at a synagogue in Pittsburgh, Pennnsylvania, stoking fears of rising anti-Semitism across the country.

Midlarsky told the Columbia Spectator that while the 2007 incident was “horrifying but not surprising,” she believes Wednesday’s crime was part of a larger “changing culture” and a nationwide rise in anti-Semitic activities.