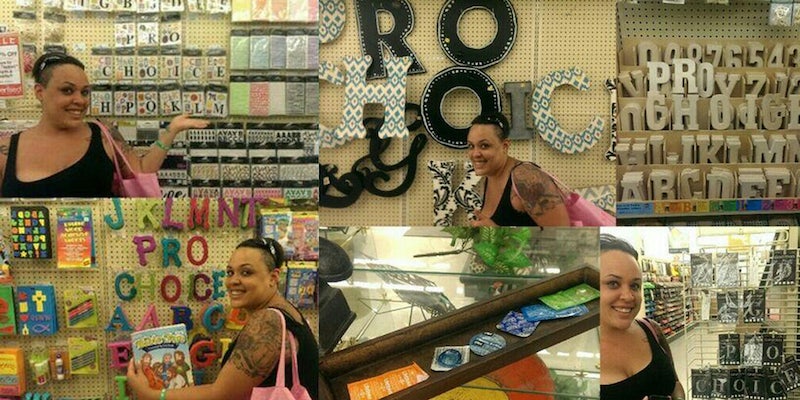 Here’s how to prank your local Hobby Lobby

Get a little crafty with your craft supplies.

Last week, the Supreme Court ruled that Hobby Lobby and other Christian-owned companies did not have to cover birth control for employees—that religious freedom is now protected under law. It was a highly contested ruling, and its implications for women and reproductive rights are potentially troubling, especially because Hobby Lobby reportedly doesn’t have a problem with birth control in other forms.

People got mad. They spoke out. They wrote about it. And if they’re like Jasmine Shea, they went to Hobby Lobby and did a little creative messaging in the aisles.

Who knew @Lawrence that you could have so much fun at your local hobby lobby pic.twitter.com/zmoMCSsBXh

Shea says this happened last Thursday after work, at a Hobby Lobby in Latham, N.Y.

“My original idea was to pass out condoms to females employees, but when I realized only one was working, my friend and I went around and rearranged all the letters in places to spell out pro-choice,” she says. “[I] got the idea from a Planned Parenthood post about how a lady used blocks to spell out ‘[all] women deserve birth control.’ We did put the letters not used neatly together on another hook or cubby so it wasn’t a huge mess for the workers to clean up. I’ve been in retail; I know how much it sucks when things are not in place, so I made it simple for the workers to put everything back together. We strolled around the store for about an hour and didn’t get caught. We did leave condoms in random places.”

If you have a local #HobbyLobby shop, you should follow @SheaDiamond‘s example. pic.twitter.com/nq4XFIZ8bj

Shea says she’s been getting mostly positive reactions since her prank started circulating on social media, though some commenters are calling what she did vandalism. She says she “simply was making a statement and a point that you can protest in a clever and humorous way.” The real issue is what this Supreme Court ruling will lead to.

“I think the ruling opens up a Pandora’s box of religion issues,” she says. “I’ve always said if I wanted god in my vagina I would have fucked him already. The Supreme Court ruling was terrible because now you’re going to have all these people using religion to either be a cheapskate or to deny people of healthcare.

“All women deserve the right to contraception, and it should be free. I don’t like the fact that my tax dollars go to Viagra pills and penis pumps for men. Women deserve equal pay and equal rights. The reason why I did the prank was to make people laugh and to prove a point that what Hobby Lobby did was kind of ridiculous.”

So if you’ve got a little free time on your hands, follow Shea’s lead, and do your own rearranging at your local Hobby Lobby. There’s no ruling against that yet.