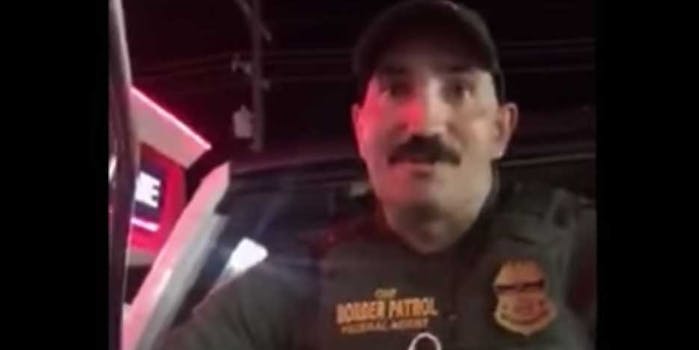 Women sue border patrol for detaining them for speaking Spanish

An agent admitted they wouldn't have been detained for speaking French.

Two Montana women are suing U.S. Customs and Border Protection for detaining them after they were overheard speaking Spanish at a grocery store.

Ana Suda and Martha Hernandez were shopping in May when a CPB agent followed them to the cashier line and Hernandez politely said hello to the agent, according to the lawsuit filed by the ACLU.

The agent, identified in the lawsuit only by his last name, O’Neal, offered a totally mannered and normal response, by asking them where they were born. Both Suda and Hernandez answered they were U.S. citizens and were born in Texas and California, respectively. According to the lawsuit, Hernandez moved to Havre, Montana, in 2010 and Suda has been living in the town since 2014.

O’Neal then detained the women for 40 minutes, holding on to their driver’s license. While they were waiting outside of the store, the two began recording their interaction with the agent, which was shared by KRTV news and went viral.

“So can you tell us in the video please why you ask us for our IDs please?” one of the women is heard saying in the video.

“Ma’m, the reason I asked you for your ID is because I came in here, I saw that you guys are speaking Spanish which is very unheard of up here,” says O’Neal.

When the woman behind the camera asks if this is because of racial profiling, O’Neal answers, “It has nothing to do with that. The fact that has to do with you guys speaking Spanish in a store in a state where it’s predominantly English-speaking.”

(It should be noted that questioning the citizenship status of a person because of the language they speak and making a judgment about their ethnicity is indeed classified as racial profiling.)

He was later joined by another agent, who reportedly said the agents would not be taking these measures if they’d overheard the women speaking French. The lawsuit further claims that the women would have been detained longer, but the agent received a text message that they were friends with his wife and were thus released.

Havre has a population of less than 10,000, four percent of which is Hispanic. The lawsuit cites the increasing growth of Spanish speakers in the region, including a new radio station that caters to the Spanish-speaking community.