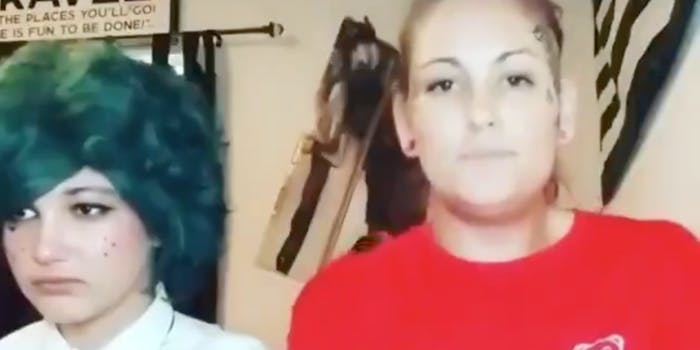 TikTok creators are attempting to liberate Alex from his toxic environment.

The hashtag #HisNameIsAlex began trending on TikTok this week following a video from a transphobic mother, who deadnamed and misgendered her son.

Her son, whose name is Alex, is known among the online community for his enjoyment of cosplay and anime. In several videos, which were shared to both his TikTok and Instagram accounts, Alex sits in the background looking distraught as his mother speaks. The woman—identified only as Tasha by PopBuzz—repeatedly refers to Alex using his deadname. For trans people, particularly trans youth, the use of a deadname can be very damaging.

Many trans people choose to change their names to better reflect the people they are, and the gender they identify with. The same is true for pronouns. Yet Alex’s mother insists in the video that people will refer to Alex by his deadname “or you will not address” him at all.

“If you cannot follow my instructions,” Tasha says in the video. “Because this is my child, you will not be in her life.”

The clip quickly went viral, as supporters and members of the LGBTQ+ community rallied around Alex. Soon, #HisNameIsAlex was trending online. On Twitter, messages of support for Alex came flooding in.

Alex’s community of TikTok creators jumped to his side, pushing #HisNameIsAlex on their platform through a series of supportive videos.

TikTokers continued to post videos with updates on Alex’s situation as it progressed. After Child Protective Services (CPS) reportedly arrived, many of Alex’s friends and followers were relieved. According to several videos, however, CPS did little to improve Alex’s situation. Many creators recommended that, rather than call CPS or the cops, people instead call the FBI or fire department.

Neither of these departments are well equipped to assist Alex either. Instead, a number of LGBTQ+-friendly organizations exist with the primary purpose of helping teens like Alex. PFLAG, the “first and largest organization for lesbian, gay, bisexual, transgender, and queer (LGBTQ+) people,” is a support system with chapters in all 50 states, Puerto Rico, and the District of Columbia.

There is also the Trevor Project, which is specifically aimed at assisting LGBTQ+ youth in crisis. Based on Tasha’s words in the video, it would appear that Alex is very much in crisis. While neither lifeline appears to have the authority to seize Alex from his unwelcoming mother, they may be able to assist him as his situation is worked out. Suicide is very high among trans youth.

According to updates from the TikTok community, Tasha was fired from her job at Hungry Bear, a sandwich shop in Murfreesboro, Tennessee. In a rainbow-drenched post on the business’s Facebook page, it decried Tasha’s actions and confirmed that she had been fired in part thanks to the #HisNameIsAlex campaign. “Regarding the recent actions of one of our (now terminated) former employees: We heard and responded to the concerns,” the post reads. “Their actions never had our support, we definitely wouldn’t condone that behavior, and not sure why anyone would think that we would. Once it was reported to us we took action.”

The business went on to ask, in the comment section of the post, about “a charity for counseling for children in similar situations.” It hopes to donate some of the proceeds from its online store to a charity that can help kids like Alex. Commenters provided plenty of great options, but it doesn’t appear that Hungry Bear has chosen a winner just yet.

In the meantime, TikTok creators are continuing to rally around Alex. One ally, Gabby Jackson, even created a petition aimed at helping Alex. The information around his situation is currently spotty and uncertain. Conflicting reports claim that he is safe and liberated from his mother’s home, while others report that he is still in her custody.