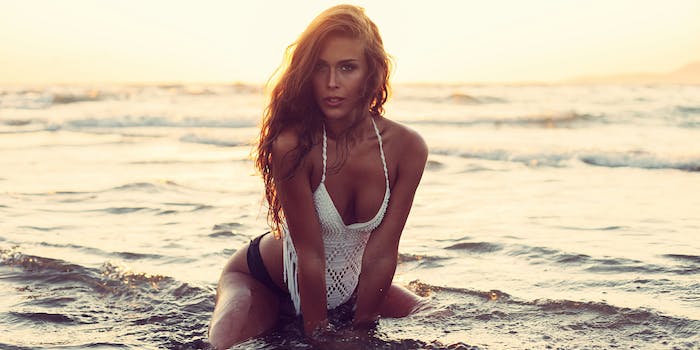 Women now have another unreasonable bikini expectation to adhere to: ‘Hip cleavage’

The 'bikini body' ideal once again rears its ugly head with a non-trend.

“Bikini body season,” before there ever was such a term coined by lady mags and celebrity rags who wanted to make sure we were “ready” for it, was once a simple two-step process: find a bikini, put it on your body.

However, those days of just buying something you like and wearing it are long behind us.

According to Hollywood Life, Page Six, the Sun, et al, the summers of the rich and the famous would be incomplete without a new “hip” trend, which these publications warn are only for the “brave” (read: conventionally attractive).

And by “hip,” we mean literally. This summer, women are going after the much-coveted “hip cleavage,” a term for the exposed skin—nay, flesh—found below the straps of a high-waisted bikini bottom. When these cleavage-donners squat, or perhaps kneel alongside their branded paddleboard, this “cleavage” becomes more pronounced, popping under the sides of swimsuit bottoms like cute, curvy-yet-cellulite-free crescent moons.

“Not content with displaying the traditional chest cleavage we all know and love, there’s now a new type in town,” the Sun boasts.

All your favorite hot celebs have jumped on the hip cleavage express, from the kleavage kween Kim Kardashian, to Ashley Graham, Rita Ora, and more. There’s no escaping the power of a well-exposed hip.

This “trend,” first and foremost, is no such trend at all, and the proclamation of thigh creases achieved with high-waist attire as a “new” fad confirms the internet’s inclining short-term memory. Two years ago, in the good ol’ summer of 2016, this same exact phenomenon garnered wonder under the witty moniker “thigh-brows,” referencing the brow-shaped folds in a person’s thigh when they sit.

At the time, Revelist introduced the phenomenon as a body-positive trend that took aim at the ridiculous, often-unachievable thigh gap. And, yes, even then the Kardashian-Jenners were leading the charge to showcase high-waisted suits and the folds of the “thigh-brows” that pronounce them.

The fact of the matter is that hip cleavage is a non-thing that, as a result of fashion’s return to high-wasted one-pieces reminiscent of Pamela Anderson on Baywatch and athleisure wear worn on Saved By the Bell and The Fresh Prince of Bel-Air, has unfortunately become a thing. Once again, we’re fawning over another could-be-fun but honestly dumb beauty standard that pretends to promote “body positivity” by showing off a woman’s hips, or something.

And let us not forget that your hip cleavage/thigh-brows/leg handles are not yours to wildly proclaim—not one bit. The godforsaken male gaze has already gotten ahold of the trend, with Sports Illustrated swimsuit’s website using it as an excuse to ogle photos of Ashley Graham in a string bikini. Maxim, too, has showcased a photo story of “15 Instagram babes” and their “ever-rising waistlines.”

“Hip hip, hooray!” the publication swoons, but not before assuring readers that “actual cleavage” is still in.

This isn’t to say we shouldn’t dress how we want for ourselves. Fuck the male gaze and fuck changing our behaviors to appease or deter men! But we’d be foolish to ignore the ways in which declaring hip cleavage a “trend” has become another excuse to objectify women.

Don’t get me wrong, there’s no shame in wanting to participate, and you should wear all the high-waisted swimsuits you damn well please. But if we look at the people really showing off their “hip cleavage,” we find ourselves looking at a group of conventionally attractive women who are celebrated for their appearance regardless of the amount of fat they have peeking out from behind their bikini straps: Thin women and women with hour-glass figures who will look just as great when they undoubtedly revert to low-rise bikini bottoms when they come back in style.

In other words, “the rise of hip cleavage” shouldn’t ever make people feel they need to chase after elongated legs and chubby-to-barely-there hips sectioned off by a piece of swimwear. Much like the thigh gap, for so many bodies this isn’t a look that comes naturally. To tell women this is what they should strive for, that this is what it looks like to be hot and sexy, is just to play into these age-old tropes of the “bikini body” that we’re trying to break away from in the first place.

So please, dress in your swimwear best how you want, but if we’re going to glorify the way the hips of conventionally attractive women look when they sit down in a pair of bikini bottoms, then why stop there? Let’s not limit ourselves to just one body trend that only works for certain women while isolating and pressuring others. Why not aim for a “belly shadow” to stylize my bloated tummy, or perhaps bring the neck roll into style? Or a fun “ear drops” to show off my fat lobes? Maybe even nickname the flesh located between my tank top strap and my boob “pit cleavage,” perhaps?

The impossibilities are endless.