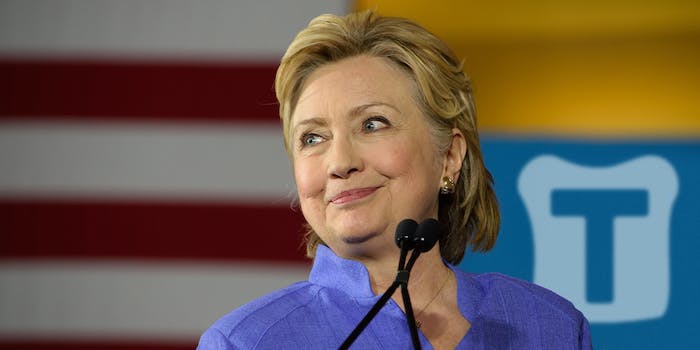 Hillary Clinton just wrote the final farewell to the Toast

She was apparently paid $50.

History will always talk about how Barack Obama was the first presidential candidate to embrace social media.

But Hillary Clinton just cemented herself as the first presidential candidate to embrace the key “librarians and archivists in New England” demographic. And also pen a post for a quirky feminist website.

The presumptive Democratic nominee just wrote the final farewell on—and to—the Toast, a site started three years ago by writers Nicole Cliffe and Mallory Ortberg, who decided to carve out a space on the web for their own unique voices. In doing so, the pair also created an aggressively eclectic harbor for women and minority voices—while appealing to the nerdy feminist librarians in all of us.

The site shut down today, with Ortberg and Cliffe moving on to other projects. In her post, Clinton (who employs at least two Toasties) praised Ortberg, Cliffe, and managing editor Nicole Chung for providing a space for those who aren’t often heard, writing:

I’m looking forward to seeing what they — and the many great writers who’ve contributed to The Toast — do next. (At least two are working for my campaign!) As we look back at what this site has meant to so many of you, I hope you’ll also look forward and consider how you might make your voice heard in whatever arenas matter most to you. Speak your opinion more fervently in your classes if you’re a student, or at meetings in your workplace. Proudly take credit for your ideas. Have confidence in the value of your contributions. And if the space you’re in doesn’t have room for your voice, don’t be afraid to carve out a space of your own. You never know — you might just be the next Nicole Cliffe, Mallory Ortberg or Nikki Chung.

And the move was a canny one. Clinton, who has turned down interview requests from other feminist sites like Jezebel, clearly knows her target demographic.

I always hated this meme but I'm glad it exists so I could properly react to @HillaryClinton writing for @TheToast. pic.twitter.com/ptjbBmpVg4

(Naturally, the comments nail it.) pic.twitter.com/A3slGBQGql

In the comments section, Nicole Cliffe mentioned that Clinton was paid the standard freelance rate of $50 for the letter.

Bring on the matriarchy.