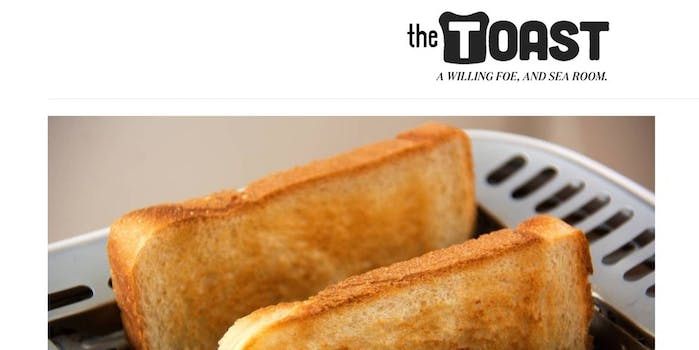 R.I.P., the Toast: A champion of strong voices with weird ideas

The site's demise marks the death of an Internet community—and a sign of the times for independent publishing.

The Toast—a willing foe, and sea room—popped up in an ocean of aggregated and sad-news lady-friendly sites in July 2013. It was the joint effort of Nicole Cliffe and Mallory Ortberg, who met while working for the Hairpin.

“We immediately clicked and knew we wanted to work together, even though we didn’t know what that would look like,” Ortberg said in an interview for the Guardian. “A year and a half later, we began to seriously discuss forming our own site, as Nicole was moving on from the Hairpin and I had recently quit my job. We realized that this seemed like a great time, or at least, we couldn’t think of a reason not too, which is the same thing as being a great time.”

Since its inception, the Toast has become a cult favorite of the Internet, publishing humorous articles like “Two Medieval Monks Invent Art,” fictive letters from Chris Kimball, musings on what it would be like if John Cho were your boyfriend, and more series essays like “‘I’ll Catch You’: Watching Supernatural With My Sister.”

On May 5, Ortberg and Cliffe posted an announcement that the Toast would close on July 1. In the post, Cliffe noted that the pressures of independent publishing and ad blockers have made revenues hard to come by.

The conversation started when revenues were down, and I had to carry payroll for a month or two out of my personal account, which I had not had to do since shortly after we started this whole project. We tweaked some things (added an ad or two which we had stripped back for the redesign, reminded people about ad-blockers and their impact on our ability to turn a profit, etc.) and revenue went back up a bit, but for a hot minute, you’ll remember I was like: “Theoretically, if this industry went further into the ground which it most assuredly will, would we want to keep running the site as a vanity project? Probably not! We would just stop doing it.”

The closing of the site seems like a last call for independent websites seeking to publish content that looks beyond clickbait. Pacific Standard, which recently moved to Medium, is bankrolled by the Miller-McCune Foundation. Earlier this month, Femsplain announced it is trying to raise money by selling memberships.

In response to the announcement, fans of the Toast took to Twitter to mourn the loss. “The Toast” and the hashtags #ToastieTwitter and #ToastWake were trending most of the day on Friday.

.@TheToast was one of my favorite places on the whole wide internet & I loved scouring it for my Longreads lists. I'm devastated. #toastwake

Does Eating Toast Make You Feel Better About #TheToast Closing: An Experiment By Me
Conclusion. #ToastWake pic.twitter.com/1IkxqIWeTi

In its nearly three-year history, the Toast has created a devoted following, a group that has dubbed themselves “the Toasties,” who regularly comment and interact online.

In a phone interview, Toast contributor Elon Green called the site “a salon in the best sense of the term—but in the comments section of a website.”

This environment was possible, in part, because of the site’s dedication to comment moderation. Managing Editor Nicole Chung noted in a tweet that comments should add something good to a site or “gtfo.”

The idea of comment moderation is antithetical to the current trend of shutting down comment sections because of cruelty and attacks, and moving a site’s community, if any, to social media.

The site also remained independent in an era when independent sites have folded or moved to Medium. Where Cliffe and Ortberg met, the Hairpin—as well as its brother, the Awl—is also moving to the self-publishing platform. The hope is that Medium can sell advertising better than independent publishers can by themselves.

Jane Marie, who wrote the Toast’s Bargain Bin series lamented the loss of the site, noting, more broadly, “In general, I’m sensing that a lot of my peers are pretty sick of the Internet and that might also be a factor in the demise of so many great sites recently. We’ve realized we’re just a virtual human centipede, making content for one another in an endless feedback loop.”

Silvia Killingsworth, editor of the Awl and the Hairpin, told the Daily Dot in an email, “The Toast was a very special place, and while I am terribly sorry to see it go, I’m comforted by the fact that I know it’s not the last we’ll hear from either Mallory or Nicole, who have always done and will continue to do great things.”

Cliffe, who has always been open about the fact that the Toast was launched with startup money from her husband, lamented the loss of independent publishing on Twitter last fall.

Cliffe commented that they too had considered a move to Medium, but didn’t want to lose their community base.

Ortberg explained further to the Guardian, “There are a lot of women who intelligently speak about how we can make the Internet a more reasonable place for women, and for anyone who is a sexual minority, trans, and particularly women of color. We can make the Internet a place where they don’t get death threats. I think that’s something most people can get behind. I try to listen to those women when they’re talking about their experiences and doing what I can to support in whatever small way that I can.”

The closing of the site means not only closing a unique community, but also a unique platform that took a chance on writers with admittedly weird ideas.

Green noted, “There used to be places that were sort of famous for launching careers, or at least shining a light on writers that people didn’t know. One of the famous farm teams for New York media was the New York Observer. And I think with increased media consolidation and the folding of smaller publications, those platforms are disintegrating and are largely gone. One of the great values of the Toast was bringing together all these voices from out of left field.”

Daily Dot staff writer, and former staff writer for the Toast, Jaya Saxena, is one of those voices. Saxena, together with husband Matt Lubchansky, created the column “Dad Magazine,” which eventually grew into a book. Saxena noted:

One of the best things about The Toast, to me, was their willingness to take chances on really strange things, and because of that, they became a home for a lot of work that I can’t imagine living elsewhere. Personally, they took a chance on “Dad Magazine,” which we were then able to make into a book. And I just cannot fathom any other site thinking “Dad Magazine” was a good idea. Every day on the Toast I see some piece of writing or art that is funny or weird or heartbreaking, and often they don’t fit the mold of how “content” is supposed to look elsewhere, and I’m really going to miss that.

She further added, “There’s certain tone for personal essays that they really wanted their writers to experiment with. They were not going for scandalous, confessional essays from young women. They let people experiment with fiction and the structure of telling their stories.”

And this is where it gets personal. I too have written for The Toast (and so has my editor at the Daily Dot). The Toast published my writing when I had just had my second child and was stuck in professional stagnation; I had been basically pigeon-holed as a mom blogger. An essay I published on the Butter, a short-lived subsection of the Toast edited by Roxane Gay, is the reason I have a literary agent. So many of the friends I have today have come from connections through the Toast. The Toast was an online community that effectively blurred the line between online and IRL.

One dramatic example of this was when in February a Toastie gave another Toastie a kidney.

And the legacy that the Toast leaves is ultimately one that reminds us of the power of community—and, strangely, even the comments section.