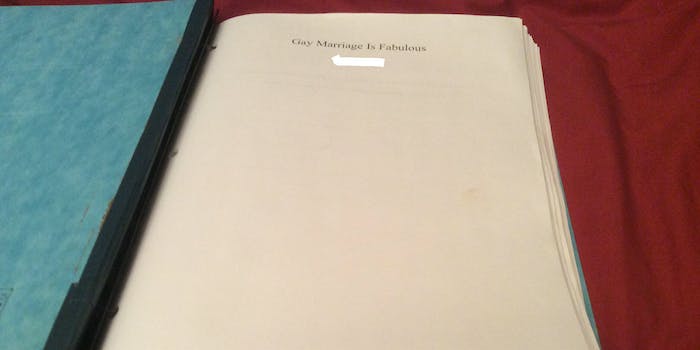 'Marriage is not between man and woman, marriage is between love and love.'

Earlier this year, students in a Missouri Catholic high school’s “morality” course were assigned an essay in which they had to defend the church’s stance against gay sexuality. Now, one teen has earned the applause of Reddit after sharing his 127-page opus that breaks from the church’s stance and defends the LGBTQ community.

Reddit user “averagesmurf” shared his “Gay Marriage Is Fabulous” essay on Reddit’s /r/lgbt subreddit last week. He said, even though he was tasked to “show and prove that the church’s position is right” about gay marriage, he had previously fought with his teacher over the subject, using the church’s teachings to defend homosexuality, arguing that many church conventions against LGBTQ life are flawed or go against Biblical teachings. After his teacher forced the class to watch an anti-LGBTQ propaganda video, he decided to write his paper and presentation in defense of gay marriage.

“When we we’re talking about ‘gay = pedophilia,’ I said that there was no evidence nor science to back the claim up, but rather much to discredit such a laughable theory,” the teen said on Reddit. “Furthermore, I went on to say that the only people who have higher rates of pedophilia are priests who molest little boys. Her response was, ‘Is that a fact? Or is that just something the media wants you to believe?’ She went on to totally deny that priests had ever molested children.”

Several posters weren’t convinced that the paper was real, so averagesmurf proceeded to post a GIF in which he goes through each page. The teen later uploaded his full paper onto Google Docs, which can be read online. While he claims the essay isn’t perfect, he’s still proud of the hard work that went into it over the course of several months.

He reportedly loves the last paragraph, saying that it’s his favorite in the entire essay.