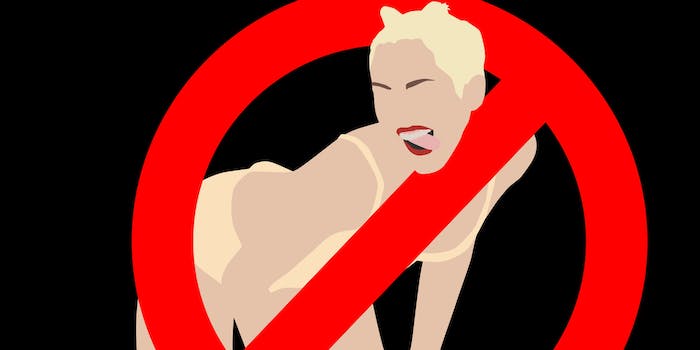 But who exactly will be the judge of what constitutes twerking?

It’s like Footloose all over again: A Maryland high school is making students and their parents sign a contract promising they won’t twerk at an upcoming homecoming dance.

That’s right, just when you thought the Internet phenomenon of twerking had finally gone away, the bouncing menace has returned, and Annapolis High School’s Oct. 26 dance is now the target of anti-twerk crusaders.

To give you some idea of how knowledgeable school administrators are in the ways of the dance trend, the contract’s description of what constitutes twerking includes buttocks “touching a partner or in the air.” Students are also prohibited from “grinding” or making out.

According to CBS Baltimore, “[n]ine out of 12 high schools in Anne Arundel County have some form of dance contracts, but not all require signatures.” They also quote Bob Mosier, a representative from Anne Arundel County public schools, as saying, “Dances have become more provocative in recent years, and we’ve had some issues at schools frankly.”

It’s difficult to police a pop culture trend, especially one as open to interpretation as twerking. Even before the attention Miley Cyrus brought to it, twerking and “grinding” had infiltrated social media and mainstream culture. (Just search Vine for “Grind With Me” videos.)

Indeed, this isn’t the first high school twerking controversy. In May, 31 students were suspended at a San Diego high school for a viral twerking video. The students ultimately had the suspensions removed from school records after their parents threated the school board with a lawsuit.

Annapolis High School principal Sue Chittim told the Capital Gazette that “[s]ome kids feel left out because of the dancing that occurs.” In that same piece, student Cali Roberts says the teachers monitoring the students might be selective in their policing, but that “[s]ophomore year dancing was really bad. They had to keep the lights on.”

The contract requires both students and parents to sign. If they don’t sign, the student can’t attend the dance. If they do sign and are caught twerking, they will be thrown out. But who exactly will be the judge of what constitutes twerking? And will they “know it” when they see it?