Why did this mental health facility kick out a 14-year-old girl?

The #HelpLily hashtag is intended to raise awareness for mental health care.

Hours later, a family friend staged a protest outside the hospital and started the hashtag #helpLily to encourage people to lend her their support and help rectify the traumatic situation.

Amy Spurway, a friend of Lily’s mother Vicky and the wife of Matthew Spurway, who was first to tweet from the scene, explained to the Daily Dot what happened at the IWK Centre last Sunday.

“She [Lily] was taken to the IWK by ambulance yesterday, and discharged with the assessment that her issue was ‘behavioral’ and not something the inpatient psychiatric unit could help with,” according to Spurway.

“Lily could not safely be transported home because of aggression (which was the core manifestation of the crisis that brought her to the IWK in the first place.) She would not get in the car, and bolted back into the hospital. Police were called. They attempted to get her seen again, and then to get her in the car with her mom.”

Spurway continued: “It quickly became clear that that was not safe so she was taken into police custody, and they brought her back to the IWK at 3 am, at which point [Lily] was admitted.”

I'm told at 3am, after 6 hrs in custody, police took Lily *back* to the IWK and she was admitted. TY @HfxRegPolice #helpLily #nspoli

On Sunday evening, the Spurways and a few other people close to Lily and her family staged a “mental health sit-in” outside the IWK Health Centre before she was admitted at 3 a.m. Because Lily is a minor, we’ve obscured her face to protect her privacy. 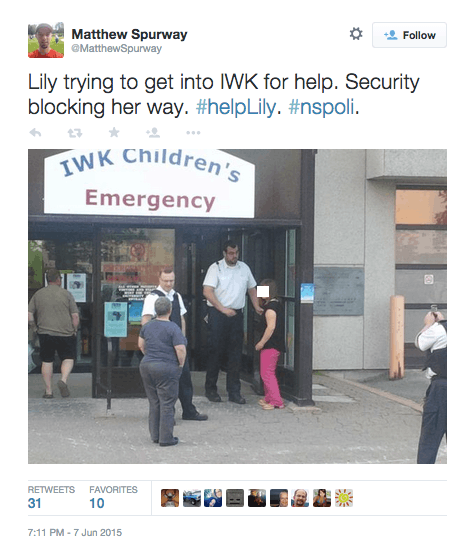 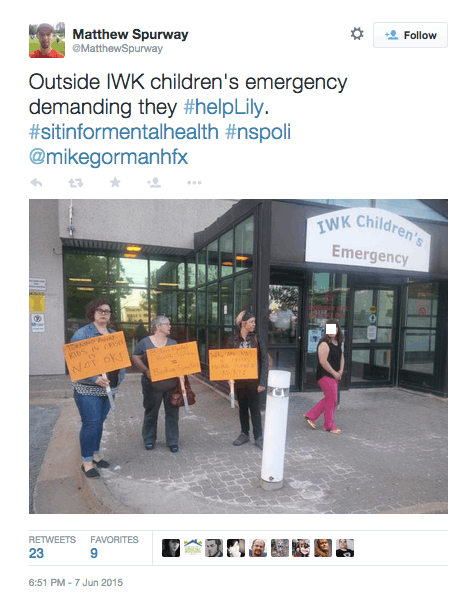 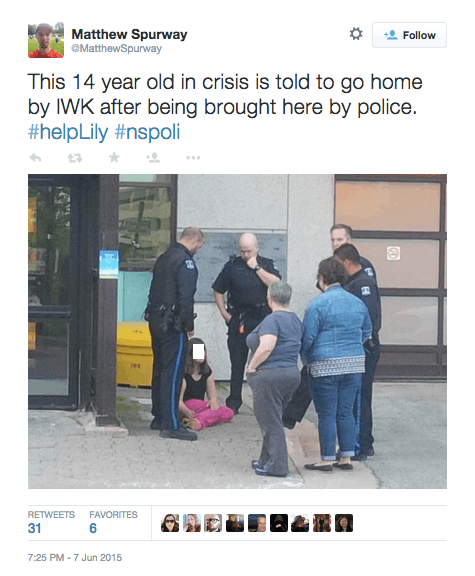 Lily is now at IKW with her mother, as they wait to hear what happens next.

A media relations person at the center released a statement responding to the situation.

Spurway said that unfortunately, this is far from the first time Lily has been denied help from people in the mental health community.

“This family has been reaching out for help for Lily for a very long time, and has hit countless barriers and roadblocks,” she said. “There really isn’t much in place for people with complex developmental disabilities in Nova Scotia, and unfortunately, the police end up handling it because the healthcare system lacks the tools and resources to properly help folks like Lily and her family.”

What is happening with #helplily is not an exception in the Canadian mental health system – it is the norm, especially for kids