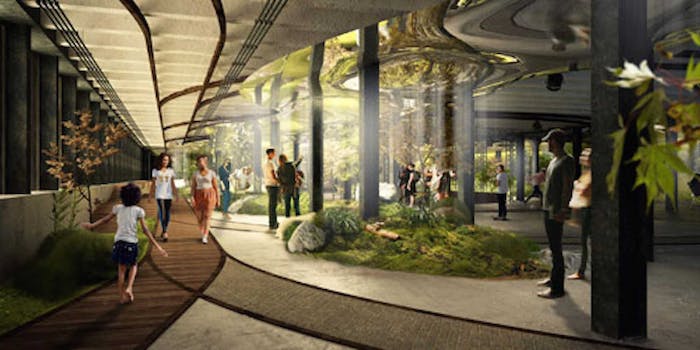 Below bustling Manhattan, a vision for an underground park

The Lowline is creating an urban oasis in an unexpected place.

Delancey Street in the Lower East Side of Manhattan is one of the most dangerous streets to cross in all of New York. In recent years, it’s been the subject of a drastic overhaul, with sidewalks being widened and more time being allotted at crosswalks. But a far more significant transformation is taking place just below the surface.

On paper, the premise reads like a scene set in one of William Gibson’s cyberpunk thrillers: an underground park, set in an abandoned trolley terminal, that uses futuristic solar technology to sustain plant and tree life.

That’s the vision for the Lowline, a first-of-its-kind urban renewal project, and after two successful crowdfunding rounds, it’s inching closer to reality.

About five years ago, a Metropolitan Transit Authority employee introduced James Ramsey to the Williamsburg Bridge trolley terminal. The one-acre station has been essentially abandoned since its retirement in December 1948, its old rail lines and cobblestones still visible from the Delancey and Essex Streets subway platform. It proved an ideal location for his vision of a park space in lower Manhattan and would reclaim a forgotten part of the city’s underground in the process.

“As New York City grows in population, just like a lot of other urban environments around the world, we need to be thinking more creatively about how we create new public space,” said Robyn Shapiro, director of community for the Lowline. “There’s actually acres of underground space that is not currently being used beneath the island of Manhattan.”

A former NASA engineer and founder of architecture and design studio Raad, Ramsey, along with his friend Dan Barasch, developed the Lowline and took to Kickstarter in 2012. The name of the park is an obvious reference to another creative public space: the High Line, the popular elevated park built on a reclaimed strip of the New York Central Railroad spur. The nod seems appropriate. Both projects reclaim unused pieces of the city’s transportation infrastructure, and High Line founders Joshua David and Robert Hammond both sit on the project’s advisory board, along with other notable names and community members, including Girls star Lena Dunham.

The Kickstarter campaign helped fund the installation of the solar technology for the Lowline, and the resulting exhibit drew more than 11,000 people.

In the simplest of terms, here’s how it works: On top of the roof, the Lowline plans to create a “remote skylight,” essentially a structure that collects natural sunlight and distributes it through fiber-optic cables. That renewable energy would be used to sustain the plant life, and the skylight would be optimized to track the sun’s movement for maximum impact.

After another successful crowdfunding campaign that wrapped in July, the team will launch Lowline Lab this fall. The research site will test the solar technology needed for the project over a six-month period. In total, Lowline has raised more than $378,000 through Kickstarter, with more than 5,800 backers from across the globe, making it the most-funded public art initiative on the site.

While the project’s staff engages with the local community, the Lowline has also garnered global interest. Donors to the Kickstarter campaigns hail from Russia, Germany, and other countries, Shapiro said, and other cities have shown interest in adopting the concept. Last year, the Lowline hosted the mayor of Paris at its office.

“Kickstarter has been amazing,” said Shapiro. “It allows a whole variety of people from all around the world to participate at a whole variety of levels in the project. This is something that is going to be open to the public, that is meant for everyone, so even at this early stage we’re able to let a lot of different people play a part in what we’re trying to do.”

Housed in a former market building slated for demolition, the Lowline Lab will simulate the actual environment of the park site. The windows will be blacked out, and a prototype of the solar technology will be used with living flora. Horticulture experts will explore which varieties of plants, from edibles and ferns to cactuses, will thrive in such an environment.

The solar equipment will arrive next from South Korea’s Sunportal, a daylighting technology company. Lowline staff members, who operate out of Raad’s light-soaked fourth floor office in downtown Manhattan, receive frequent photographs from the Sunportal developers, Shapiro said. A solar technology prototype sits on a side table in the Lowline office.

The lab will essentially double as a classroom. It will be open to the public each weekend and host the upcoming semester’s Lowline Young Designers Program, an ongoing education initiative that teaches local students about solar technology and what makes an effective public space. Previous students have presented a range of ideas for what should make it into the future Lowline—everything from fluffy holographic clouds on the ceiling to creative solutions to regular park problems, such as excess litter. (Students suggested eye-catching trash cans that will encourage park-goers to dispose of their garbage responsibly.)

Additional programming throughout the lab’s six-month run will include monthly tech talks and weekend tours of the lab and the proposed park area.

“People hear about the Lowline, they’re excited about it, but they want to see and experience part of it,” said Shapiro. “I’m excited that the lab will allow people to experience the magic of being surrounded by nature in the middle of the winter and feel natural sunlight in an interior space.”

Renderings of the proposed park on the project’s Kickstarter pages and website hint at what the future Lowline might one day look like. There’s a dish-like silver ceiling, trees, and hazy streams of sunlight. In one mock-up, there’s a pool of water and children smiling with their parents. It looks less like a subway station and more like a sci-fi utopia, the beams of light lending it a heavenly aura.

Much is still needed, though, to transform the derelict underground terminal into a budding green space. Part of the process involves ongoing conversations with city agencies, including the Department of Transportation, as well as the MTA, which still manages the terminal. The Lowline is working with the city’s current administration, Shapiro said, and elected officials support the project. Construction will cost an estimated $60 million, and the potential opening date may be another five years away.

Meanwhile, a downtown that’s undergone significant change continues to grow above ground, and the Lowline team must remain nimble. Designers nixed a potential location for the solar collectors, Shapiro said, because of shadows cast by buildings going up in the area.

“We have a Lowline space that right now is sort of dark and dank and very brown, and we want to green it and we want to turn it over to the community,” Shapiro said. “We are trying to get people to kind of feel and see the same thing we do.”

The Lowline has the community and history on it side.

In studying the proposed site, Shapiro noted, Lowline designers learned that the long-obsolete trolley terminal is itself a product of the community’s power to organize and advocate for improvements. The terminal, which opened in 1908, came about following local demand for an overnight shelter for trolley cars that, until then, spent off-hours sitting on busy Delancey Street, creating even more crowding in the busy area.

The Lowline, in a sense, returns the terminal to a neighborhood that once pushed for its use.

This Daily Dot article was made possible by Heineken. The City Kickstarts editorial series has no formal relationship with Kickstarter. The project featured, the LowLine, is independent and is in no way affiliated with or funded by Heineken or the Daily Dot.