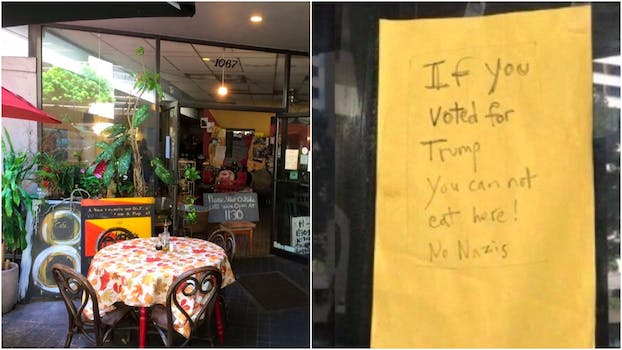 The aloha spirit is not in effect.

You could say Hawaii, a culture that embraces a third gender and a state where interracial marriage is the norm, is a very tolerant place. However, a Honolulu restaurant is making the news for refusing to show one particular group the aloha spirit: Trump supporters.

Italian restaurant Café 8 1/2 put up a sign this week that read, “If you voted for Trump you can not eat here! No Nazis.” 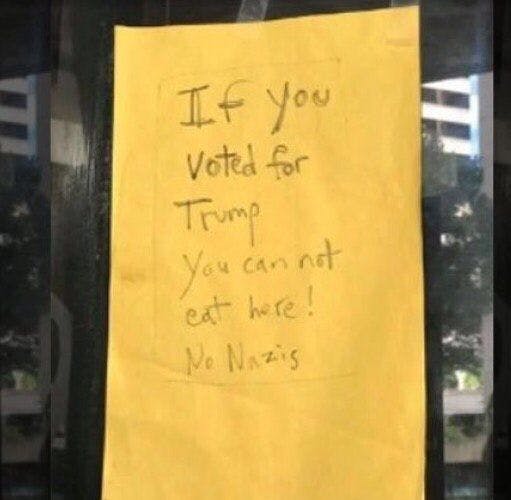 It wasn’t long before customers started spamming the mostly five-star restaurant with one-star reviews on Yelp. “Went in here the other day while I was in the great state of Hawaii to look for Obamas [sic] birth certificate and stopped in here to get some chicken parm, and god damn it was horrible,” one wrote. Others have claimed food poisoning since the story picked up steam on Fox News or have simply derided “liberal hypocritical establishments” in general. The Yelp page is now under an “active cleanup alert,” so new reviews can no longer be posted.

One of Café 8 1/2’s owners, Jali Warner, told Fox News that her husband “Robert just wants to express how much he doesn’t like Trump. If people take it personally or it hurts them, we cannot help. That’s why we say they have [a] choice if they want to come or not come. We don’t force them.”

Hawaii consistently votes Democrat, with 60 percent of the popular vote having gone to Hillary Clinton in the presidential election; President Obama, originally from the Aloha State, is currently vacationing on Oahu with his family. It should also be noted that restauranteur Robert Warner originally hails from Seattle, where the unofficial motto isn’t a “hang loose” shaka sign. Just sayin’.