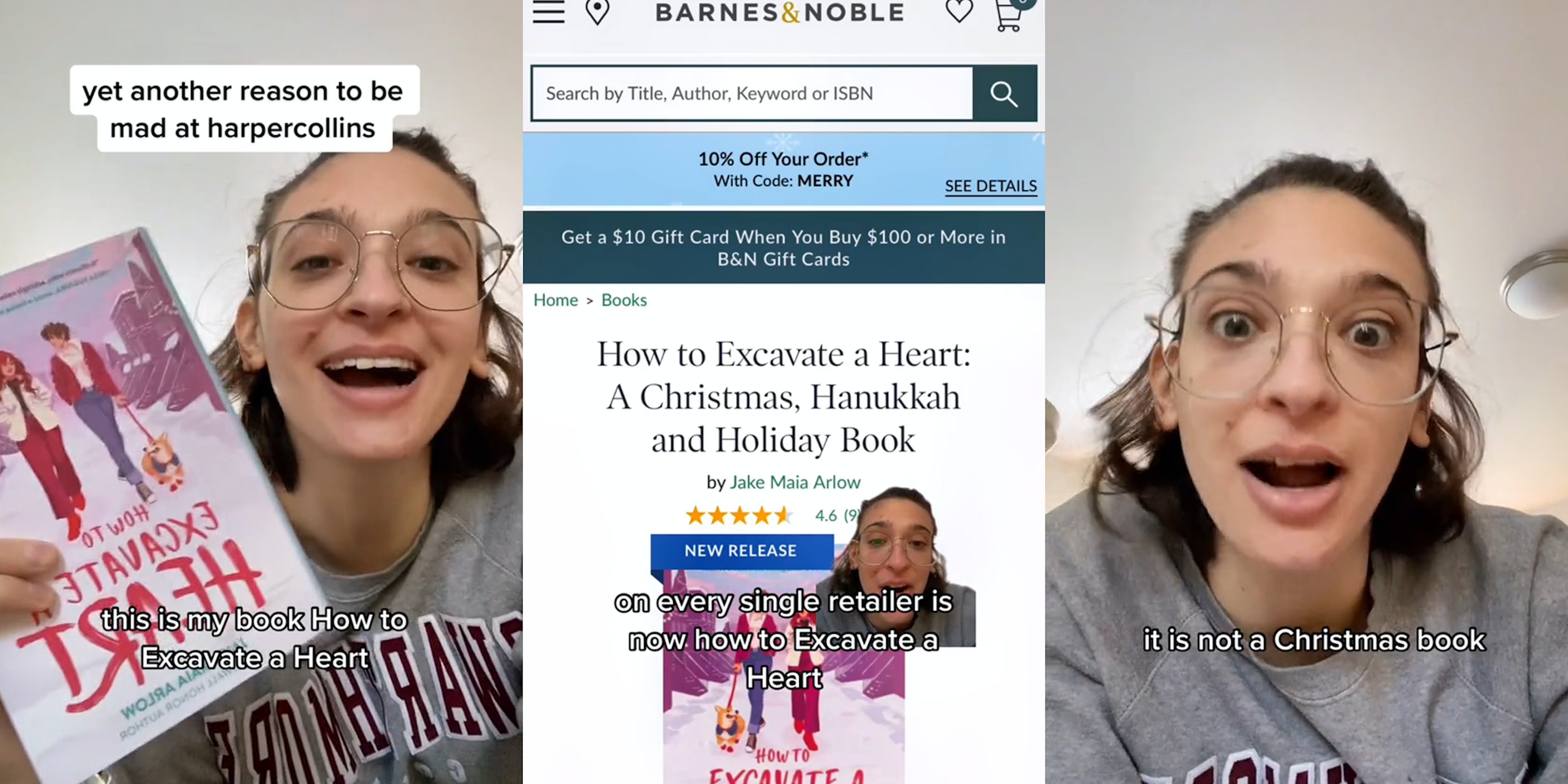 ‘I’m gonna give you another reason to be extremely mad at HarperCollins’: Author says HarperCollins rebranded her lesbian Jewish romance novel as a Christmas story

'The way I GASPED at the new title.'

An author and TikToker by the name of Jake went viral after sharing her dealings with HarperCollins. Employees at the publisher are currently on strike for increased wages and benefits, and Jake speculates that the current workplace climate may have something to do with the massive title change for a book she published.

Jake, who posts under the handle @jakewhosagirl, says that her young adult book about two Jewish lesbians developing a winter romance was inaccurately rebranded as a Christmas and Hanukkah story without her consent.

Jake begins her video by introducing her novel, “How to Excavate a Heart,” which she describes as a “lesbian, Jewish, holiday YA rom-com.” She also explains that the novel has undergone a title change before.

“Now, the full title is ‘How to Excavate a Heart,’ and I was told by my editor it used to be called ‘Winter Break’ and we changed that because HarperCollins did not want to market it as a holiday book,” she says. “Keep that in mind.”

Jake continues to say that many HarperCollins workers are on strike, including her editor, who is the only person from HarperCollins that she has contact with.

“Now, also keep in mind, I’ve never emailed someone other than my editor from HarperCollins,” she says. “Everything goes directly through my editor. So now that they’re on strike, I have literally no one to ask about this. No one consulted me. So, let’s take a look at what happened.”

Jake then cuts to a screengrab of her book on Barnes & Noble’s website and says, “The Title of ‘How to Excavate a Heart’ on every single retailer is now ‘How to Excavate a Heart: A Christmas, Hanukkah and Holiday Book.'” After showing the changed title on the Barnes & Noble website, Jake also shows that it has been changed on Amazon and her own bookstore, Queen Anne Book Company.

Jake made something very clear in her clip: “It is not a Christmas book. I described it a lot, and I still do, as a Christmastime book, but it stars two lesbian Jews. And on Christmas day, in fact, they celebrate ‘Jew-mas’ and not Christmas.”

Jake also says that she would not have minded if the novel were branded as a “holiday” or “Christmastime” story, despite not being about Christmas or Hanukkah. What is upsetting to her is that she was not consulted about the change at all.

“I’ve no one to ask about this. I’ve no one to complain about, so I’m complaining to you,” she says. “And I really hope this changes ’cause it fucking sucks and it’s not true.”

TikTokers were shocked at the title change and couldn’t understand why anyone would give a story such a long-winded and descriptive name. Others tagged HarperCollins on TikTok in the hopes of getting an answer on Jake’s behalf, while some speculated that the title was intentionally changed to something awful in order to “pressure” Jake’s editor back into working.

“Review your contract- see if alterations are due for your approval. Big red flag,” one user commented.

“This feels intentional, like they want you to pressure your editor back to work,” a second wrote.

“As someone who worked for a big 5 in publicity, very strange they didn’t connect you with marketing or publicity. You should reach out to your agent,” another shared.

However, some commenters provided a practical explanation as to why “How to Excavate a Heart” was given such a strangely protracted title.

“It’s called keyword stuffing to try to appear higher in search results. And I hate it,” one commenter suggested.

According to Search Engine Journal, keyword stuffing is a Google search result ranking technique that came about before search engine optimization. Websites that had more keyword matches to a user’s search would rank higher on Google, so websites began “stuffing” page titles, descriptions, and content with keywords to manipulate the system. The practice is now outdated, however.

The Daily Dot reached out to Jake via Instagram direct message and to HarperCollins via email for further comment.