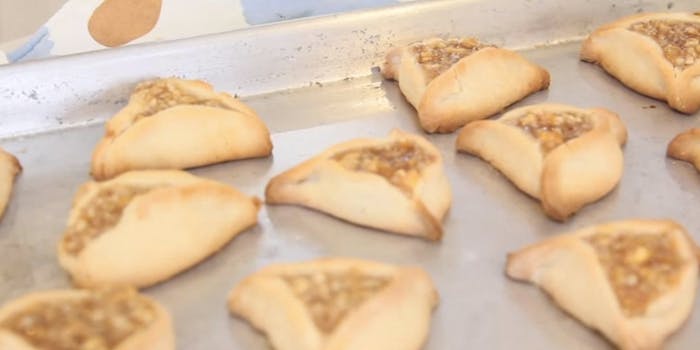 The triangular cookie symbolizes the demise of Haman, the antagonist of the Jewish Purim story.

March 5 marks the arrival of Purim, the Jewish holiday that tells the story of how Queen Esther saved the Jewish people from destruction. So it’s time to update your attempts to make hamantashen, the three-cornered pastry that symbolizes the three-cornered hat worn by the evil Haman, the antagonist of the Purim story.

Not to go into the whole megillah, but Haman was one bad dude. According to the story, he was the advisor of King Ahasuerus, and he told the king to kill all the Jews of Persia. Purim celebrates the triumph of Esther, the Queen of Persia and Ahasuerus’ wife, who successfully foiled Haman’s plot.

But enough about history, let’s eat.

Before we get all fancy schmancy, let’s start with a basic how-to video for making hamantashen.

Now that we have that under our belt, let’s up our game and try a spin on the classic cookie: a red velvet hamantashen recipe.

If you’re too busy to call your mother this Purim, then you’re probably also too busy to go to the store and buy flour and eggs. Here’s a mini-hack at hamantashen that involves pre-made dough. (We won’t tell if you won’t.)

Wanna change up the filling of your hamantashen without creating a tummel? Check out this video, which uses rhubarb instead of the standard poppy seed or prune filling.

Tell your bubbe to look away for this next take on classic hamantashen. For those who prefer to drink their meals, we present to you the hamantashen martini.

Oy gevalt, kids these days have no respect for tradition. Instead of using apricot jam, or the old school eastern European filling lekvar, some people are actually filling these wonderful pastries with feta cheese, pumpkin, and even potatoes. Potatoes! Potatoes in a hamantashen isn’t hamantashen at all. It’s basically just a knish. Is nothing sacred?