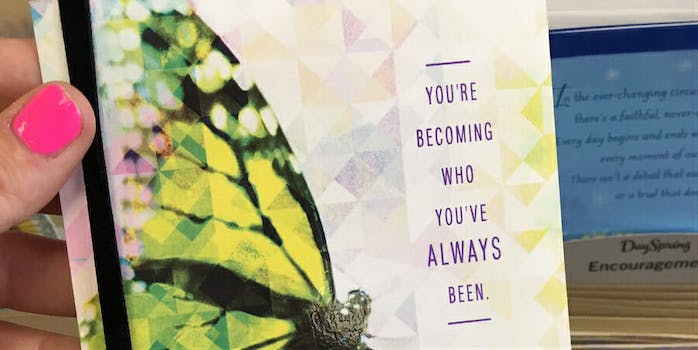 Is Hallmark cashing in on trans rights?

Despite all the e-vites and paper-free posts, greeting cards are still pretty popular in the U.S. So it makes sense that Hallmark has taken note of other types of celebrations outside of Mother’s Day and graduation, introducing cards to celebrate a transgender person’s transitioning.

According to Bustle, Hallmark began rolling out trans-themed cards in 2015. But the cards didn’t receive much exposure until earlier this May, when a Twitter user shared a gender transitioning card found under Hallmark’s “Encouragement: Transgender/Transitioning” section at a local CVS.

“You’re becoming who you’ve ALWAYS been,” the card reads. “How wonderful is that?”

Transgender users quickly responded, praising the card as a touching form of representation from a major company. For them, the card serves as a positive and supportive take on transitioning, one that’s rarely found in mass culture.

I want someone to give me that card … hehehe 😊 ok for my taste needs more pink.

However, many transgender advocates have mixed reactions to the greeting card line. While some see it as a thoughtful and encouraging gesture for acceptance from the company, others think the cards sound like corny, stereotypical conceptions of gender transitioning from a cisgender perspective. Many pointed to the larger systemic issues that transgender people face, too, such as poverty or low-income due to employment discrimination, and how a greeting card doesn’t necessarily solve those problems (though a money pocket would help).

Ur right this hallmark card def solved trans people's lack of access to health care, the poverty they face, the violence… https://t.co/mfSXmPpUT7

One transgender comic series, Villainette, summed up the controversy succinctly with a comic in which a Hallmark representative ignores a transgender person’s greeting card preferences in exchange for one that will make relatives “pay $4.99” for a card. As a result, the sentiment is totally one-sided: The cards make the cisgender sender feel good, and it leaves the transgender recipient feeling alienated.

thx @renatasnacks @Hallmark @lgbtqnation @PinkNews for the good intentions but um i'd hate to receive a card that sugarcoated trans struggle pic.twitter.com/8f3xwF1NeO

Still, Hallmark sees the gender transitioning cards as an important step toward capturing their customers’ “real lives.” And the company appears eager to roll out more LGBTQ-themed cards over time.

“Hallmark is committed to helping people share what’s in their hearts with those they love, and we strive to be inclusive and relevant with our products,” a spokesperson told Bustle. “We are committed to reflecting people’s real lives and enriching their relationships, and our mission includes all people.”