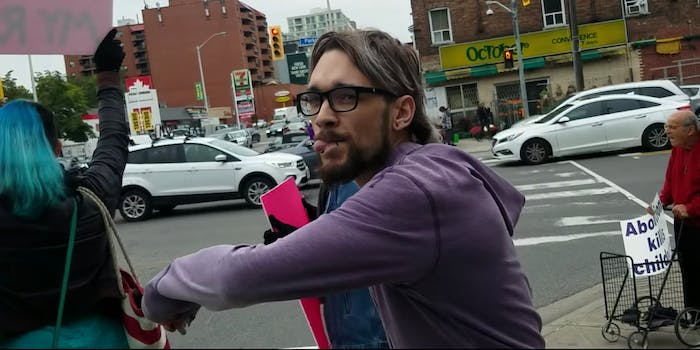 The protester said she 'did not see it coming.'

A Toronto hairstylist was fired from his job this week after a viral video showed him kicking a woman at an anti-abortion rally, Vice reports.

Anti-abortion activist Marie-Claire Bissonnette filmed the hairstylist, Jordan Hunt, as he spoke to her and other activists at a Life Chain event in Toronto on Saturday. The video shows him asking Bissonnette whether a teenager who was raped should have the right to an abortion.

As Bissonnette forms her response, Hunt twists his body and comes at Bissonnette with a kick.

“I meant to kick the phone,” Hunt can be heard saying multiple times amid the commotion of people yelling for someone to call the police.

In an article she wrote about the incident on a website called LifeSite, Bissonnette said a fellow protester called 911 and that Hunt left the scene after tearing off an anti-abortion ribbon from her chest. She wrote that she started filming Hunt because he was drawing on protesters’ signs and protesters themselves with markers.

“I did not see it coming. I didn’t anticipate any violence,” Bissonnette told Global News. “As soon as he kicked me, the only thing I could think of was to get the police, make sure someone calls the police.”

Bissonnette said she plans to file a complaint against the police who arrived at the scene because after she showed a video of the incident, they said, “What do you want us to do about it?”

Her video, which has over 1 million views, launched an internet-wide search among conservatives for the identity of the man who had kicked her, Vice reports. On Wednesday, Toronto hair salon Noble Studio 101 issued a statement on Instagram saying that Hunt had been fired because he was “caught on camera assaulting an innocent bystander at a pro-life rally.”

“We don’t condone his actions and he has been let go,” the statement says. “We believe that everyone has a right to an opinion and the right to voice their opinion without fear of physical violence.”