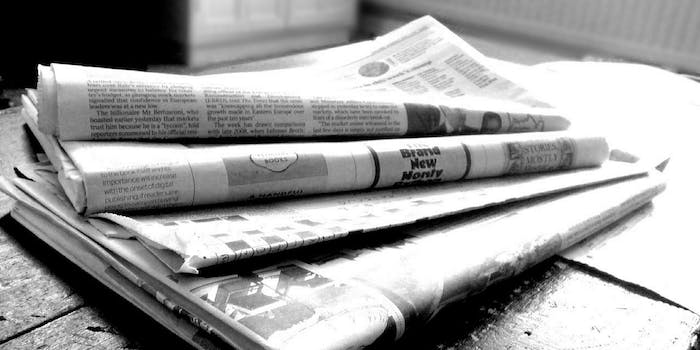 The accused publisher says he 'regrets' behavior he exhibited in the 1970s.

As the #MeToo movement grows into its third month of seeking justice for sexual harassment and assault survivors, more women are coming forward to disclose perpetrators within their communities.

On Monday, the Anniston Star, an Anniston, Alabama, newspaper, reported that Alabama media magnate and former paper editor and publisher H. Brandt Ayers was said to have sexually assaulted several female staffers in the 1970s, spanking them in a sexual manner in the newsroom.

According to the Star, Veronica Pike Kennedy, a former news clerk and later a reporter, says Ayers spanked her when she was 22 and he was 40. Kennedy said Ayers had approached her while in the newsroom on a Saturday, asked her to read an article of his, then told her she’d “been a bad girl” who needed spanking. When he picked up a metal newsprint ruler and attempted to pull her off her chair, Kennedy resisted.

“I was literally holding on to the chair,” Kennedy said. “He picked me and the chair up, and wrestled the chair out of my hands. And he started spanking me.”

Mike Stamler, a reporter who was also 22 at the time, was in the room at the time of the incident and confirmed Kennedy’s account. Kennedy said she didn’t come forward at the time because she was afraid her father would try to kill Ayers, but that the incident made her determined to become a reporter.

Two other women who previously worked at the publication told the Star of similar spanking incidents but declined to have their names published in the report. Ayers’ behavior, however, was prevalent to the point that the paper’s editors allegedly appointed a woman on staff to warn new hires about him after female staffers sought help.

Ayers is a well-known figure within small-town publications in the South, and took over the Star as editor and later publisher in the 1960s. He stepped down as publisher in 2016, but is chairman of the company that publishes the paper, and still regularly writes regular columns. Star staff began reporting on Ayers in November when Joey Kennedy, the husband of Veronica Kennedy, wrote about the incident in a column without mentioning Ayers or the paper by name.

“As a very young man with more authority than judgment, I did some things I regret,” Ayers said in a statement responding to the allegations. “At my advanced age, I wish I could relive those days again, knowing the seriousness of my position and with the accumulated judgment that goes with age.”